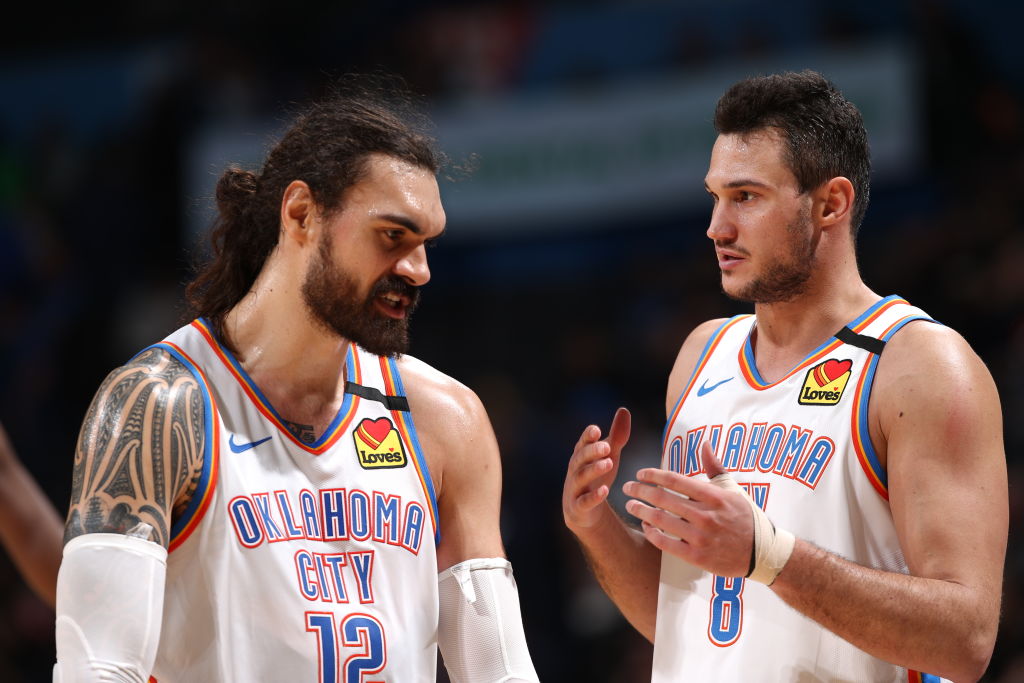 Danilo Gallinari recently told the media in Oklahoma City that he was glad the Thunder didn’t trade him at the trade deadline and that he hopes to re-sign with the team this summer when he’s a free agent. Gallinari talked about how the Thunder have a great atmosphere, great teammates and a group that is winning as reasons for him wanting to stay.

It’s that last part that qualifies as one of the biggest surprises of the NBA season. The Oklahoma City Thunder are winning, despite everything having been set up for this to be a rebuilding season.

Thunder general manager Sam Presti is no stranger to seeing star talent leave one of the league’s smallest markets. This time around though, it was Presti pulling the strings and not a star free agent. Kevin Durant may have left of his own accord, but when it was time to trade Russell Westbrook and Paul George, Presti made sure he got a huge haul in return.

For George, Presti acquired a package that included Gallinari and up-and-coming young guard Shai Gilgeous-Alexander. In addition to the two talented players, the Thunder picked up five first-round draft picks and swap rights in two additional years from the Los Angeles Clippers.

After the George trade, Presti decided it was time to move on from franchise icon Westbrook too. He swapped Westbrook to Houston for Chris Paul and two more first-round picks and two more sets of swap rights.

All told, Oklahoma City acquired three players who have been key starters for them this season, seven first-round picks and the rights to swap picks in four other years. It’s likely that’s a package of players and picks that won’t be beaten anytime soon in future trades.

It’s clear that this season the Thunder aren’t rebuilding and will be a playoff team. As a matter of fact, Oklahoma City is closer to the second seed in the Western Conference (four games back) than they are to out of the playoffs (10.5 game cushion). While it may not be a deep playoff run for OKC in a tough bracket, they’ll unexpectedly be playing games in mid to late-April.

If you could get Presti in an honest moment, he’d likely say this wasn’t at all what he expected. This season was set up for the Thunder to see what they have in Gilgeous-Alexander, while boosting the trade value of Gallinari, Adams and Schroder. If all went well, they might have even been able to find a trade for Paul and the $85.5M he has remaining on his contract after this season through 2021-22.

Now, that plan has hit a bump in the road, but not an unwelcomed one. Paul has proven he’s still productive and even beyond that, as his All-Star selections shows. Gilgeous-Alexander is one of the league’s best young talents and has now proven he can play both on and off the ball. Adams’ style of doing all the dirty work fits in perfectly with Paul and Gilgeous-Alexander. Schroder has even rebuilt his value, as he’s a Sixth Man of the Year Candidate. And OKC still has all those picks coming from the Clippers and Rockets.

But Presti does have some decisions to make this summer. Gallinari will be a free agent, as will backup big man Nerlens Noel. Noel’s an easy decision. He’s played on a minimum contract the last two years and seems to have found a home in Oklahoma City. He may see a bump in pay, but nothing the Thunder can’t easily afford.

Gallinari is the tougher call. He’ll be 32 years old at the start of next season and has a lengthy injury history. While his 44/41/90 shooting splits are impressive for a perimeter-based scorer, he’s seen his free throw attempts per game drop from 6.0 to 4.8, and his rebounding drop from 6.1 to 5.6 boards per game. It’s likely Gallinari is progressing more and more towards the spot-up, stretch-4 part of his career, as opposed to the versatile inside-outside scoring forward he’s been.

That makes it a tough call for Presti this summer. Gallinari wants to be in Oklahoma City and he’s a key part of the Thunder’s success. But to commit big money over a long contract could hamper the team’s roster-building efforts down the line. And, despite Gilgeous-Alexander’s emergence as a wing option v.s just a lead ballhandler, OKC still has a major need for wing depth.

How should the Thunder approach this summer? Presti won’t have cap space to work with this summer no matter what. Not with Paul, Adams and Schroder on the books for a combined $84.4M. In the summer of 2021, Oklahoma City’s cap sheet clears up considerably. As of now, it’s just Paul (at a whopping $44.2M) and rookie scale options for Gilgeous-Alexander and 2019 first-round pick Darius Bazley on the books for that summer.

With 2021 shaping up to be the next big free agent bonanza in the NBA, that makes the Gallinari decision this summer a critical one. The prudent path is the “years, not dollars” approach. It almost doesn’t matter how much money the Thunder give Gallinari this summer, as long as they keep it a short-term contract. They aren’t going to be players in free agency anyway.

The pitch should be to sign Gallinari to a huge one-year contract, or a two-year deal with a team option or non-guaranteed money for the second year. Think of it almost like an NFL contract, where the team significantly front-loads the contract to save money down the line as the player’s play deteriorates.

Even if it’s a significant overpay for Gallinari in 2020-21, that allows OKC to keep the core from this year’s surprise group together, while retaining flexibility for the future. And that future, with Gilgeous-Alexander, still-productive veterans and an unprecedented amount of additional draft picks, couldn’t possibly look much brighter.