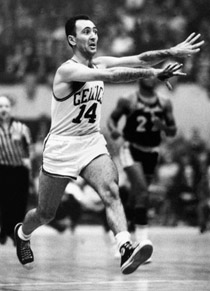 On the morning of Friday, February 27, 1959, about 4,000 youngsters attended a free basketball clinic directed by Boston Celtics head coach Red Auerbach. It was the start of a long day at the old Boston Garden. Former Harlem Globetrotter Marques Haynes and his traveling basketball troupe, the Harlem Magicians, played at 1:15. And immediately following the exhibition, the Boston Celtics faced the Minneapolis Lakers; both games were scheduled for the afternoon because a nightly ice show booked the Garden all week.

Players from the Celtics and Lakers were featured at the morning clinic. The Lakers’ amazing rookie Elgin Baylor performed a jump shooting and rebounding demonstration; Vern Mikkelsen, the team’s last tie to the great George Mikan Lakers, taught pivot moves such as the hook shot; the Celtics’ Sam Jones and Frank Ramsey handled foul shooting, dribbling and defense; and throughout the clinic, Auerbach emphasized the importance of defense to the attendees. The pros weren’t paying particularly close attention—that night, the Celtics defeated the Lakers by the astonishing score of 173-139.

The game was such a staggering display of high-scoring offense (and terrible defense) that it broke seven NBA records, horrified then-NBA Commissioner Maurice Podoloff and embarrassed Celtics legend Bob Cousy.

“I don’t know how you could describe [the game],” says Celtics’ reserve Lou Tsioropoulos, who was injured and watched the game from the Crow’s Nest high above the court. “It was a combination of being awesome, ridiculous and nonsense.”

The objective of the game is to put the ball in the basket. One point, two points or, at least since 1979, three points. It doesn’t matter how you accumulate them—jump shots, hook shots, layups, reverse layups, one-handed dunks, two-handed dunks, fadeaways, tear drop floaters, pick and pops, screen and rolls—buckets are all that matter. It’s why basketball fans love high-powered offenses. It’s why they reminisce about the Showtime Lakers, Doug Moe’s Nuggets and Nellie’s Warriors. It’s why no one outside of Charles Oakley, Alonzo Mourning and a vocal minority of New Yorkers look back fondly at those bruising, first-team-to-70-points-wins games from the ’90s between the Knicks and the Miami Heat.

Basketball shouldn’t be a war of attrition. Buckets are all that matter. The sport was evolving in the late 1950s. Basketball was emerging from the two-handed set shot era and it was a much different time on the court, off the court and after the season. “Everybody had to have a summer job,” Frank Ramsey remembers. “From April to September nobody played basketball, you got a job. My job was at a construction company building things. [Bob] Cousy had a summer camp. [Tommy] Heinsohn sold insurance. [Bill] Sharman was a golf pro. We started practice in the middle of September. We would practice twice a day for two weeks and then play exhibition games every night for two weeks.”

It didn’t get easier once the season started as the road trips were grueling. For the Lakers to reach the East Coast, they would typically take a train out of Minneapolis late at night and arrive in Chicago in the morning. From there, they switched trains and departed to New York or Philadelphia. The $6 per diem helped a bit. But then again, the facilities and equipment were often deplorable.

“The gyms were awful back then in the 1950s. We would play in dark gyms. The ball would hit the floor and not bounce back up on some spots. They would take the floor out after you played and then they had ice hockey,” says former Laker Rodney “Hot Rod” Hundley. “The balls weren’t even completely round. It’s hard to explain the old NBA ball. You couldn’t shoot that ball that well.”

Hundley says that both factors contributed to the low shooting percentages that populated the period. How bad was the shooting? During the ’58-59 season, New York Knicks forward Kenny Sears shot only 49 percent and led the NBA in field goal percentage by a wide margin. Red Auerbach, however, had a philosophy that offset low field goal percentage: His Celtics would push the pace and run fast breaks off both missed and made shots. Once the ball went through the net, the closest Celtics player to the rim would catch the ball before it hit the ground, take it out of bounds and rifle the ball up the court. Auerbach routinely yanked players from the game if they failed to comply.

“You tried to get the ball up the court as far as possible with the least amount of passes,” Ramsey says. “Sometimes we scored without dribbling the ball.” “That was our secret weapon—the pace,” says Celtics legend Tommy Heinsohn. “When I coached, I called it ‘Pressure Offense.’ You get the ball far up the court and get [opponents] totally disorganized. You try and take their legs out from underneath. They weren’t conditioned for that pace, more often than not, and you could always count on big guys breaking down. It became an art form.”

The Celtics perfected the art form during the ’58-59 season, averaging over 116 points per game and featuring six players—Sharman, Cousy, Heinsohn, Bill Russell, Ramsey and Sam Jones—who averaged double figures. “Pressure Offense” reigned as the Celtics took over 112 shots a game. The pace was much quicker than today’s NBA—the Golden State Warriors led the League this past season in field goals attempted with over 85 per game.

The team was built for up-tempo basketball. Bill Russell cleaned up the boards and launched pinpoint outlet passes to Cousy, the best playmaker of his era. Fantastic scorers such as Sharman, Ramsey and Jones surrounded Cousy, while Heinsohn was a potent inside presence. But the Celtics were so talented and well coached that they scored easily even when the game slowed down.

“In the half court, they ran six plays,” says Hall of Fame coach and basketball encyclopedia Dr. Jack Ramsay. “They ran the same six plays every season. They called them [Play] 1-6. Play 6 was Russell’s play. That meant he was going to go to the post and they would get him the ball there. Then he would go to work and take his shots. Then they ran a high screen and roll with Cousy. They would run Sharman off a high screen, [which] was another play.”

The Lakers also liked playing fast. Though future Hall of Famers such as George Mikan, Slater Martin and Jim Pollard were long gone and they had fallen from their early decade dominance—winning four championships in five years—the Lakers were still an exciting squad. “That Lakers team was a loose bunch,” says Roland Lazenby, author of The Show: The Inside Story of the Spectacular Los Angeles Lakers and Jerry West: The Life and Legend of a Basketball Icon. “The owners of the Lakers were beside themselves because it was such a hard partying group. Hot Rod was an undisciplined guy but was a Globetrotter kind of [player] who entertained the crowd. He was one of those Showtime freaks…He would shoot 30-foot hook shots or a hook shot free throw and was always looking to do something.”

The Lakers rolled into the February 27 game in Boston having won five out of six games. Two nights earlier against the Cincinnati Royals, Baylor scored 55 points in a 116-96 victory. Still, momentum wasn’t much of a factor when the Celtics played the Lakers in those days. The Celtics had won 16 in a row over their rival, who, like most teams in the NBA, struggled against Boston because they had no answer for Bill Russell. Russell, however, would sit out the record-shattering game because of a strained tendon in his right leg.