Redux: This is a Mock Draft! 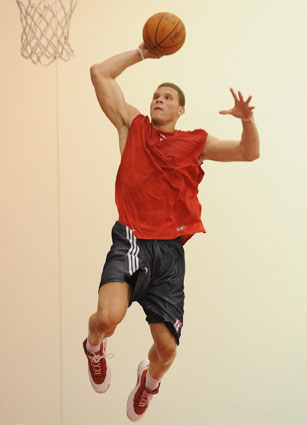 As the 2009 SLAMonline Mock Draft wraps up so does some of our claim of knowing the best available talent. If we’ve learned anything after all 30 selections, it’s that being as good as General Managers in the L is damn near impossible.

What you say to friends about being able to handle an NBA franchise is fickle. One bad draft pick, one nasty trade, one bad free agent signing is all it takes to get yourself axed. Not to mention you’ll be shoved face first into the eternal ire pile of thousands of fans and one billion dollar owner.

Luckily here, we were able to f*ck things up a bit.

We warned you from the beginning. And we also said we would be proud of calling this mock draft our own no matter how ugly a duckling it turned out to be. So here I am talking to you two days before the 2009 Draft, presenting you something with an over-under of five on total correct picks.

Sorry James Johnson, if we’re right about you, I’ll eat my hat. Better yet, since I’m not much of a hat person, I’ll eat your pocket square at the Garden this Thursday. I’ll be there, and this is a proof positive record. We’ll put it on YouTube. Here’s your ticket if you want to make me (and, by proxy, us) look like a fool for banishing you to the second round.

So it might be a good idea to talk a few specifics about this mock draft and not dig myself into any more particularly deep, dark and very bitter and unhealthy holes. Considering we began this over a month ago during the second round of the playoffs, only having one hiccup at the tail end (thanks Myles!) is a testament to the SLAMonline crew. I thank them all immensely.

Contrary to popular belief, a lot goes through a GM’s (even a mock GM’s) head when he makes a selection. I won’t pretend to know what it’s like because I, just like you, enjoyed this event from the comfortable and safe desk chair. When I dropped a comment, it was often of the “Excellent choice!” variety, but if I had to be a bit more critical, this would be my quick two (or 10) cents for the entire Mock Draft:

1. Who the f*ck is Slava Kravtsov? When I googled his name, not only did I find mostly images of Jonas Jerebko—who would’ve been a reasonable selection at No. 28, by the way—but I think I temporarily shut down the Draft Express server while trying to visit this prospect’s profile. I’m still not sure if Myles decided to make a second round pick instead of his first round pick with the No. 28 pick, and going back keeps giving me migraines. So maybe Slava is still out there in Internet fantasy land. He doesn’t exist, does he? A 7-0, 21-year-old with decent skills in a draft this devoid of big centers couldn’t be overlooked for this long, right? Heck, who am I kidding, the Spurs will probably take him and develop him into an all-star.

2. Sam Young to the Bulls is nice. But please, please, please don’t let new GM Gar Forman be so anxious that he takes the forward in the middle of the first round. Yikes, someone got a little over-anxious at the No. 16 spot. No one would’ve said anything if the Bulls used their No. 26 on Young, but let this be a lesson that caffeine should be banned from all war rooms.

3. Could Hasheem Thabeet and Ricky Rubio be the biggest stiffs ever taken in the top three in a draft? Likely not, but there’s also a chance. I like them both. They’re solid players and even better people. But if I’m the Grizzlies and the Thunder, I’m listening to every trade that’s offered. Scratch that, I’m offering my pick to anyone who’s interested! Both teams have huge holes and enough prospects to stock a full D-League team. Thabeet is the only defensive-minded big man in the draft with proven skill, but it doesn’t make him a good No. 2 overall selection. Don’t bank on Ricky Rubio because people say he’s the next Pete Maravich. Bank on established talent. That is, unless his name happens to be Kobe or KG.

4. Alright, I get it. Stephen Curry is the God of the Class of 2009. He is exactly what he is: a scorer. Not a point guard. Not a defender. Not a ninth man. Not J.J. Redick. He’s deft at getting those things that all teams need to win ballgames. That’s good enough to me and should be to others as well.  When a team calls Curry’s name, they will actually know what they’re getting. How’s that for a novel concept? He’s a known capacity who shouldn’t be stretched and fitted into anything else.  This also means he’s not the best player in the Draft and he’ll likely go too high. But, hey, who’s going to hate if their team lands Steph?

5. James Harden and Blake Griffin are the real deal. We know they can play. They won’t be the best players in the Class of 2009, but they’ll be among the best. Let’s hope teams learned something about the dangers of “potential” from the high school “era” from ’00-05 and take Harden sooner than we did at than No. 7.

6. This Chase Budinger character… He’s a volleyball player, isn’t he?

7. Nick Calathes, the sophomore guard from Florida, got the snub in this first round, and it’s not because we overlooked him. Dude can’t make up his mind like a low-carb dieter trying to order from a pizza/pasta restaurant. First he’s in the Draft. Then he’s not in the Draft and playing for Panathiakos. Then he’s back in the Draft and still playing for Panathiakos. Then he’s not going to Europe next year? If Calathes is this terrible at making up his mind, how is he going to decide whether to shoot or pass (or rebound??) in the L? Our GMs sure didn’t like it. Just order the slice of pepperoni and get it over with Nick. You’ll like the League better too.

8. Other than the aforementioned Young and Kravtsov, here are a couple guys who, according to the “experts,” went too high in the SLAMonline Mock Draft: Terrence Williams (No. 12), Patrick Mills (No. 19), Wayne Ellington (No. 21), Victor Claver (No. 24). Overall, not bad, considering these dudes have legitimate NBA futures. Yes, they’re not likely to become the next Tony Parker-esque steal, but they have strengths that could land them anywhere between 14-30.

10. The European craze needs to end immediately, at least for this draft. Other than Ricky Rubio, there isn’t a prospect overseas who deserves to be paid (and played) like a first rounder. Of course, when all the known qualities from the American collegiate circuit are snatched up around the mid- to late-first round, David Stern will call names that make even Jay Bilas run out of adjectives. You know the routine. Cue Dicky V. Cue Darko mentions. Re-run tape from past drafts for all it matters. The thinking is GMs can still hit a home run by selecting a player from the under-scouted regions of the world instead of taking a (often much-needed) role player with their low draft picks. This is madness.

So what if James Johnson is a couple Snickers away from being overweight or if Chase Budinger would rather play volleyball on the beach? Don’t make a fool of the franchise. That’s the No. 1 goal. Take talent that fits your team. Be prepared. Come to compete.

But that’s just my two cents. Here’s how it really went down: