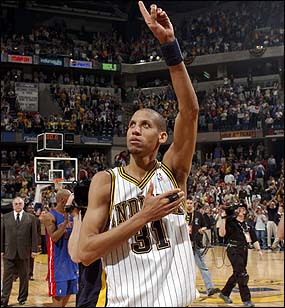 The frighteningly loaded Dallas Mavericks (currently enjoying a historic winning streak, and on pace for 69 wins) have an open roster spot, and they’re looking to fill it. Buried in the notes of a column in the Dallas Morning News today comes this gem: Mark Cuban wouldn’t mind Reggie Miller filling the spot.

Owner Mark Cuban brought up Miller’s name before Monday’s game against the Hawks.

Avery Johnson said he and president of basketball operations Donnie Nelson have been discussing options for the open spot, but are not close to any decisions.

I seriously doubt that Reg would be so willing to give up his cushy TNT gig for a roster spot on the Mavs. Then again, this would probably be his best shot at getting that elusive ring.

What do you guys think?

(Thanks to the ‘Haus for the tip)