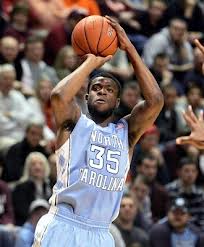 Reggie Bullock is used to overcoming hurdles. In first grade, he was held back after struggling in the classroom. His freshman season, after finally joining the storied North Carolina program and working his way into the Tar Heels’ rotation, he went down with a left knee injury that ended his season. Then, after a solid junior campaign in ’12-13, when he decided to turn pro, many scouts doubted his potential to be selected in the first round of 2013 NBA Draft.

“I did not originally agree with his decision,” UNC head coach Roy Williams says. “I’ve had 12 guys leave early in the last eight years, so I’m not against that at all. But, of those 12 guys, he’s the only guy that wasn’t guaranteed in my mind to be a first-round pick. I told Reggie I didn’t think it was the right thing to do.”

But Bullock didn’t care. After helping lead the Tar Heels to the third round of the NCAA Tournament, averaging 13.9 points, 6.7 rebounds and 2.9 assists per game, he entered his name in the Draft and headed to Chicago for the Combine.

“I’m just confident in my abilities and I think I can do a lot of things on the court that not many people in this Draft can do,” Bullock explains. “I can shoot the ball, I have a great defensive attitude and I’m ready to work to become the best player I can be.”

That open level of communication and constructive relationship between player and coach has been a long time in the making. Bullock verbally committed to the UNC program during his sophomore year of high school before the majority of the nation had even heard his name.

Then, upon arriving at Chapel Hill for his freshman year, Bullock immediately became a staple in the Tar Heel’s rotation, earning the role of perimeter lock-down defender on a team that was highlighted by Harrison Barnes. He averaged 6.1 points and 2.8 rebounds per contest in just 14.5 minutes his freshman season. He came back hungrier his sophomore year, earning more playing time and scoring 8.8 points per, while grabbing 5.1 boards a night. His career culminated with 31.4 minutes per game and serving as the team’s third-leading scorer and second-leading rebounder.

“I just spent a lot of time in the gym and worked as hard as I could on my game,” Bullock says. “I tried to improve my shot every year and, with more minutes, I was able to just play more consistent and show how hard I had been working in the gym.”

His confidence and game have shown through throughout this draft process. After working out with 13 teams, Bullock is now widely considered one of the best shooters and perimeter defenders in this Draft class—two skills that have become a valuable combination in swingmen in the L. Scouts are starting to believe in Bullock just like Williams always has.

“I told Reggie he had to make the decision on what he wanted to do and no matter what I was going to support him,” Williams says. I believe in Reggie. He’s part of our program, he’s like family and I’m pulling for him without a doubt.”

Now, with the NBA Draft just hours away, Bullock might just be the top 3D player that has become so coveted in the NBA. And even though he’ll most likely transition from being a focal point of UNC’s offense to a supporting player, Bullock feels confident in his ability to take on a role.

“I can shoot the ball, rebound pretty well at my size and defend,” he says. “I’m just going to be ready for whatever my team wants me to do and I’m going to go in and work hard.

Williams is proud of his accomplishments and potential, but he’s going to miss Bullock as a person as much as he’ll miss him as a player.

“I’m going miss that smile,” Williams said. “He’s such a warm and compassionate kid. On the court, I’m going to miss that feeling that I had when he starts to shoot the ball. I didn’t have to wait for it to go on, once he started shooting, I had a pretty dog-on good feeling.”

When Bullock’s name is called, he’ll undoubtedly flash that smile to his family and friends back at home in Kinston, NC. And for a kid that wasn’t supposed to be even considered in the first round, getting selected before No. 31 seems pretty dog-on now.