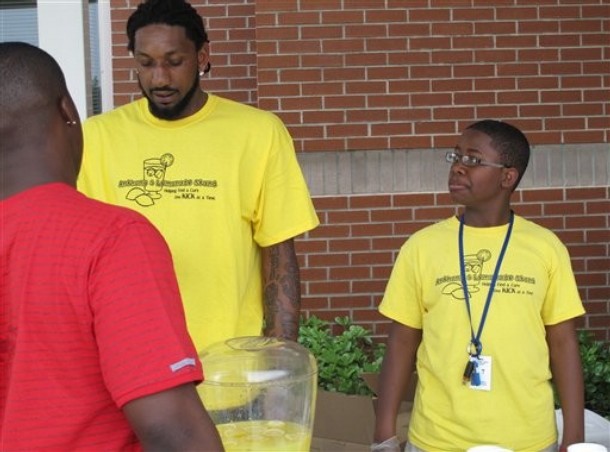 It’s been a wild year for Renaldo Balkman. He began the season with the Denver Nuggets, then was acquired by the New York Knicks in the Carmelo Anthony deal for a second stint in the Big Apple.

A college standout at the University of South Carolina, the former Gamecock has fond memories and meaningful roots on the East Coast. When he heard the story of 13-year-old Anthony Frederick, Balkman was eager to help.

Frederick’s mother Dru was diagnosed with breast cancer five years ago. When she was finally cancer free, the vicious disease struck again. This time it was Frederick’s father, diagnosed with Leukemia, a disease characterized by an abnormal increase in white blood cells.

In an effort to raise awareness and further cancer research, Frederick started the organization KICK (Kids Inspired by Cancer Kampaign), in which he raised $15,000 by himself.

This past Wednesday, Balkman gave the seventh-grader a surprise visit at Dent Middle School in South Carolina, where the two worked side-by-side to squeeze lemons and sell lemonade to help fund cancer research. They raised nearly $3,000, and Balkman concluded the surprise visit with complementary Knicks tickets for Anthony and his family. SLAM caught up with the five-year veteran to discuss the event, his plans for the summer, and his goals for the upcoming year.

SLAM: How did you hear about Anthony Frederick and his situation?

Renaldo Balkman: One of the members of his family knows me from high school, so I’ve known the family for some time. I heard his story and it

touched me. When you’re a kid, your most valuable possessions are toys. So for a kid to be selling his own toys for money and awareness… that hurts a lot. I figured I could help him raise some money by squeezing lemons at the lemonade stand.

SLAM: Has anyone in your family or friends been touched by cancer?

RB: No, but I still wanted to step up and make a difference. It’ll be a nice surprise, hopefully lift up his spirits.

SLAM: Did you have a goal in terms of how much money you wanted to raise?

RB: I didn’t have a goal; I just want to raise enough money to help him out, and to build a relationship where I can keep helping out in the future.

SLAM: Is this a one-time thing or do you plan on going back/following up with Anthony and his family?

RB: We squeezed lemonade for only one day, but I’ll definitely be coming back, because I got family and kids in South Carolina and I also know the family. When you have roots and you know the family, it’s important to keep checking in with them.

SLAM: That’s great. Now onto basketball. What’s the current mindset of the Knicks? Your team got swept in the first round—that must have been tough. Do you still have a salty taste from the loss to Boston?

RB: Yeah man. I mean, the biggest step for us this year was to make to playoffs. That was a stepping-stone because the franchise hadn’t been there in a while. You know, you have to crawl before you walk. Next year our goal is to make it farther than we did this year. This year we came up short, and it hurts. We could have won the first two games, but we didn’t so there’s no excuses. We just have to come back harder next year and get after it.

SLAM: I hear that… What’re you doing this off-season to stay in shape and get better?

RB: Every off-season is a chance to work on your game and get better. I’ve been staying in the gym, working on what people tell me I can’t do. I’ve been shooting a lot, doing some conditioning. We gotta play ball man, it’s our livelihood.

RB: Yeah, I’ll be in Puerto Rico at the end of July. We’ll be playing in Brazil, Argentina and Mexico. Like I said, I got to keep working on my game and this will help me do that. Playing in the World Championships is practice to try and win a gold medal in the Olympics. I’ll also be holding a skills and drills camp down in Puerto Rico. It should be fun, just to hang out with the kids and help them develop their games.

SLAM: You guys won gold medals at the Centrobasket and Central American Games last year, and you were named MVP. How’s the team compared to the rest of the world? Does Puerto Rico have a realistic shot?

RB: As you said, we’ve won some gold medals in the smaller tournaments we played in last year, so we’re constantly improving and trying to perform at a high level. This year we’re trying to win a gold medal and get the spot in the Olympics. So we have a chance.

SLAM: There are two viewpoints that players and analysts have towards the effects of summer basketball. Some say summer ball gets you better, while others will attribute a slow start or nagging injury to a summer hangover. What’s your take?

RB: In my early years I got a lot of minutes, but I haven’t played as much as I wanted to, so the summer is an opportunity for me to get better and stay in shape. I don’t think your exhausted by the beginning of the season. At least I’m not. Like I said, the day I take a break or rest is the same day someone else is getting better. So every time I get a chance, I’m in the gym. I don’t want to go back to training camp and then fall behind. I want to keep working, so I can beat the man next to me when training camp starts. I want to come back next year and make a difference.

SLAM: How was it playing on an undersized team in New York? You didn’t get many minutes in Denver but came to New York and stepped on the floor almost immediately. We saw you play the 4 many times this year. Was that new to you? Frustrating at all?

RB: I am a natural 3 but was playing the 4. It was tough playing the 4, but I’m a versatile defender. I’ve guarded every position from shooting guard to center, so it wasn’t that big of a deal. But it’s a mental thing. I’ve been in the league so long, been working on my game constantly. So at this point you gotta just stay in your routine and show everyone in the world that you can do what the coaches ask of you.

SLAM: Amen. Another one of your teammates, Anthony Carter, was in a similar situation. He came back and gave the team a solid effort pretty much every night. That was special.

RB: Anthony Carter is a veteran. Even in Denver when he wasn’t playing, he always had a positive attitude. When I wasn’t getting burn in Denver, there were times when I was going to hit the wall, but AC kept me going. He kept me so strong and made me a fighter. He’s just a great guy. When he got an opportunity, he just had lots of energy and played defense. I love playing with him. It was good for him to get a chance, to show everyone he still has game.

SLAM: What’s the team’s goal for next year? Is the focus already in place?

RB: We want this ring, but we gotta take it one step at a time. Our first goal is to make it back to the Playoffs. Once you get into the Playoffs, it’s a whole new season. Hard work and preparation will get us places, because we have the talent.

SLAM: Who you rooting for in these finals? Any picks?

RB: [Laughs] No comment. I’m rooting for the New York Knicks, but we’re not playing. I wish the best for everybody, but I wish it was us.