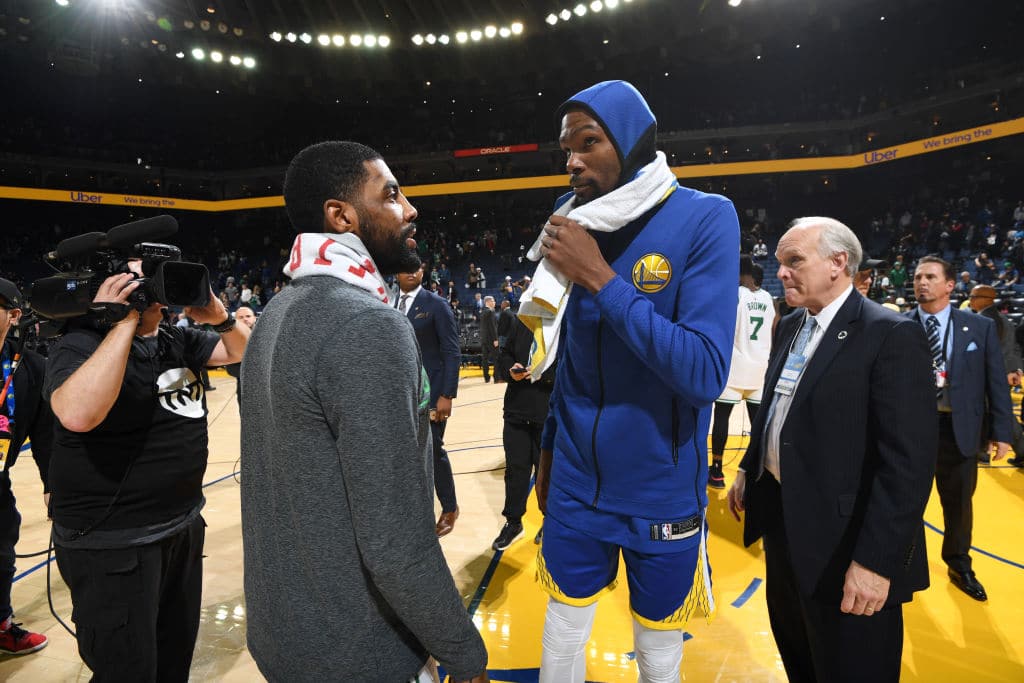 Kevin Durant and fellow soon-to-be free agent Kyrie Irving have reportedly “met twice” in recent weeks to discuss the possibility of teaming up.

The two superstars are said to have chatted before and after KD’s ruptured Achilles tendon injury during the NBA Finals.

Durant, 30, is reportedly “really pissed off” about how the Golden State Warriors handled his short-lived return to the court.

Durant and Irving, league sources say, have met twice in recent weeks to discuss their desire to continue their careers on the same team, an idea forged while playing together on the U.S. national team. The first meeting took place in the Bay Area while Durant nursed a strained right calf; the second occurred in New York shortly after Durant had surgery to repair a ruptured Achilles tendon suffered in Game 5 of the NBA Finals.

Coach Steve Kerr says he was told Durant could not further injure himself by playing, which obviously proved not to be true. If Durant was told the same, it would give credence to the notion that, as one league executive claims, “He’s really pissed off at the Warriors.”

In an overtime loss against the Los Angeles Clippers in November, Durant and Draymond Green argued over an end-of-game decision by Green not to give Durant the ball. Green, later that same night, reportedly questioned Durant’s commitment to the team. Although both players later insisted the dispute was overblown and quickly resolved, sources familiar with Durant’s off-court business say Durant has since purchased a new home in New York and moved his belongings there.

Irving, meanwhile, also recently purchased a new home in South Orange, New Jersey, but league sources say he is pressing Durant to join him with the Nets and is trying to recruit [DeAndre] Jordan as well.

Related Danny Ainge: ‘I Have No Issues at All With Kyrie’