Report: Knicks Back in Hunt for Carmelo Anthony 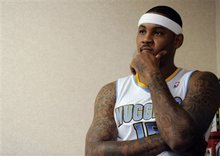 Things have been very quiet on the Carmelo Anthony Trade Watch front lately. A little too quiet for the Knicks, it seems.

According to ESPN, New York is making “significant progress” in their bid to land the Denver Nuggets’ franchise player.

The report claims that the Knicks may now even be willing to toss in Danilo Gallinari to make things work:

After a period of dormancy following the collapse of a four-team trade late last month between New Jersey, Denver, Utah and Charlotte, the Knicks got back in on the bidding about two weeks ago after Anthony made it known to the Nuggets that he would not budge on his refusal to sign a three-year, $65 million contract extension with Denver. The offers the Knicks have proposed have always centered around packages including Anthony Randolph, the expiring contract of Eddy Curry and a first-round draft pick they would acquire from a third team, and New York has softened its stance on including forward Danilo Gallinari in a trade.

The most recent obstacle, according to the source, was for the Knicks to use one of those assets, likely Randolph or Gallinari, to acquire a player from a third team that the Nuggets value more highly than either of the Knicks forwards. The source said that obstacle can now be overcome, with the Knicks confident they can get their hands on a player the Nuggets would prefer.

Anthony, meanwhile, is doing his best not to feed the rumor mill. He told FanHouse that re-signing with Denver remains an option, and that he expects to be with the team when the regular season begins.

It certainly doesn’t feel as though we’re anywhere close to a resolution for Carmelo Anthony and his current employer.