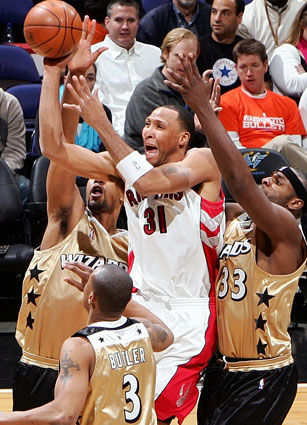 As it had been previously rumored, The Matrix is now reportedly a Dallas Maverick.

Mark Cuban’s computer screen apparently told him this was a good idea, and he pulled the trigger on a rather complicated deal to acquire Marion. Involved in the transaction are the Mavs, Raptors, and either the Grizzlies or Thunder.

An NBA source said Wednesday that the deal for the 6-foot-7 forward will happen and that a trade call with the NBA office had been set up for today. Barring unforeseen circumstances, the deal will go through today. Details weren’t completely known. But it’s a sure thing that Jerry Stackhouse is the principle piece moving from the Mavericks to Toronto. But it is likely he will move on from there.

It matters not for Stackhouse, because he will be an unrestricted free agent when he is bought out by the team that eventually ends up with him. That team, which is believed to be Memphis or Oklahoma City, will absorb a $2 million salary, the guaranteed portion of his 2009-2010 contract. Other players could be involved in the deal, although none of the Mavericks’ key personnel will be involved.

As the linked article points out, the Mavs could potentially roll out a starting lineup that looks like this next season: Gortat, Nowitzki, Marion, Howard and Kidd, plus Terry reprising his sixth man role.

That, of course, isn’t enough to win a title, but it’s certainly nothing to sneeze at either.