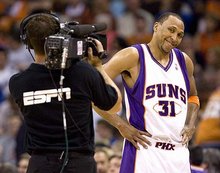 When opening the sports section in any of the Phoenix-area papers, you can expect to read some kind of variation of the following headlines: Steve Nash Is Amazing; Amare Seems to Be Fully Back; Shawn Marion Is Whining. Rinse, lather, repeat. It never fails.

That’s why it shouldn’t come as a surprise that the news out of Phoenix, according to the Arizona Republic, is that The Matrix is unhappy with his contract situation and is seeking a sizable extension:

But according to several Suns sources, Marion seems to be unhappy that the team will not talk about a contract extension. The word is that the four-time All-Star, in his eighth year with the team, wants $60 million over three years. Marion, already the highest-paid Suns player, will make $16.4 million this season and $17.8 million for 2008-09.

Now, I suppose, the question becomes, Is Shawn Marion worth $20 million per season? In my opinion, he is not. For a guy who does a Pippen-esque job of filling up the stat sheet, Marion benefits tremendously from the system Mike D’Antoni runs and if he were smart, he’d be buying Steve Nash dinner every night during the season.

It’s pretty simple, actually: If you’re not a franchise kind of guy, you know, the kind of player who puts butts in the seats, commands double teams on every possession and takes the full brunt of the blame should the team underachieve, you cannot ask for $20 million per. Shawn Marion, unlike only a handful of guys who meet the criteria in the previous sentence, does not deserve that kind of money.

A propos of nothing: Watching Monday Night Football last night, I yet again came to the realization that Vince Young is indeed THAT dude. While Reggie Bush is his athletic equal and has occasional flashes of brilliance, he doesn’t have the same kind of magnetism that oozes out of Young.

Vince exudes the kind of swag generally reserved for heavy-handed pimps, certain heads of state and assassins. Like Jordan in his day, even his misses (or in Young’s case, incomplete passes and other botched plays) look good. He is one of those rare athletes whose very presence alone is worth the price of admission.