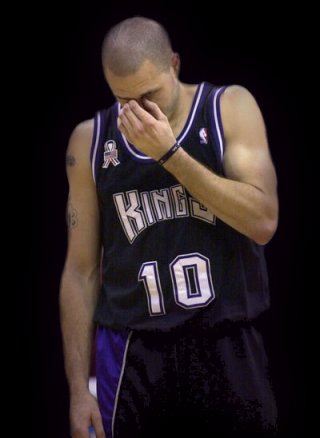 -Cleveland is desperate for a point guard, and trade talks are reportedly heating up.

According to multiple league executives, the Cavs and Sacramento Kings have restarted talks to bring Mike Bibby to Cleveland. The two teams nearly completed a deal shortly before February’s trading deadline and have been in discussions again over the past several days.

A version of the deal was close to happening Thursday, sources said, in a three-way move with the San Antonio Spurs.

(What, Eric Snow isn’t good enough for you jerks?)

-DeShawn Stevenson and the Wizards are very close to a deal, says the WaPo.

-The Pistons have their Amir. From the AP:

The Detroit Pistons and forward Amir Johnson agreed to an $11 million, three-year contract Thursday, keeping the restricted free agent with the team that drafted him out of high school.

This season, Johnson is expected to get a chance to play regular minutes as a backup power forward. He spent parts of each of the past two seasons playing in the NBA’s Development League, where he dominated opponents, often leading the Pistons’ affiliates in scoring and rebounding.

-Jason Kapono met with the Toronto media yesterday, and he said all the right things.

“Toronto obviously offers the best style of play … you couldn’t ask for anything more,” the 26-year-old Californian said at a news conference Thursday. “As a player with my skills, I fit pretty well here.”

(But, will he be able to maintain his great tan in the T-Dot? Stay tuned…)