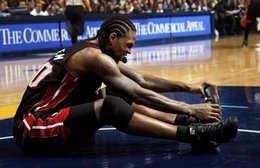 Long before the Miami Heat lost a heart-breaker to the Memphis Grizzlies at the buzzer on Saturday night, everyone had already realized that they were in big trouble.

Udonis Haslem injured his foot in the third quarter of that game, and according to the latest reports, Miami might not see its leading rebounder (and toughest player) in action again for a few months.

A doctor will make a recommendation about whether or not Haslem needs surgery to take care of the torn ligament in his left foot.

Haslem will be examined by a foot specialist Monday, and that doctor will make a recommendation on whether the Heat’s top inside presence will need surgery to repair the injury. Nevertheless, the Heat and Haslem are prepared for the fact that late February and probably March are likely his earliest possible returns to the floor. If surgery is needed, the recovery could push into the spring.

Haslem suffered the injury in a loss to the Memphis Grizzlies on Saturday night. An MRI confirming the torn ligament was performed on Sunday in Miami. Haslem has averaged 8.0 points and 8.2 rebounds in 13 games for the Heat, who will miss his toughness on the boards and defensive interior. The Heat will have to turn to Zydrunas Illgauskas to play more minutes in the frontcourt and use lineups that will include LeBron James(notes) at power forward.

For what it’s worth, Pat Riley is telling everyone to calm down, referring to Haslem as “Superman”.

The options out there aren’t exactly great — Erik Dampier ain’t busy these days — but Riley admitted that Miami will seriously consider bringing in an additional big body to fill the void (while releasing another player.) Via ESPN: