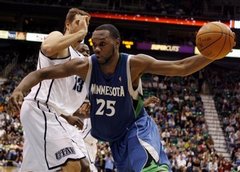 Despite being the best player on their roster, David Khan and the Minnesota Timberwolves aren’t willing to pay the remaining $42 million on Al Jefferson’s contract over the next three years.

Ergo, according to multiple published reports, they’re on the verge of trading him to the Utah Jazz.

Both the Star Tribune and ESPN guess that Minnesota will receive a number of draft picks in exchange for the big fella:

The Utah Jazz have quickly moved into the lead to acquire Al Jefferson and were actively working Monday night to complete a deal with Minnesota, according to NBA front-office sources. Sources told ESPN.com that the Jazz and Timberwolves are on the verge of completing a trade that would slot Jefferson’s contract into the $14 million trade exception that Utah created earlier this week in its sign-and-trade deal with Chicago for Carlos Boozer.

The full extent of the package that Minnesota would receive in return was not immediately known, as one source told ESPN.com that the two teams were still discussing the terms of draft picks that Utah would send to seal the deal.

But because its trade exception is large enough to absorb Jefferson’s $13 million salary next season, Utah can complete a trade for Jefferson without sending back any players to the Wolves. Sources with knowledge of Minnesota’s thinking said Monday that the Wolves’ main aim in shopping Jefferson in recent weeks has been securing multiple future first-round picks and taking back as little salary if possible.

It’s of course no secret that the T-Wolves have wanted to get rid of Jefferson for quite some time now; going forward, they’ll have to count on a combination of Kevin Love, Darko Milicic and Michael Beasley to hold the fort down in the post.

As for the Jazz, management can now begin selling the idea to the frustrated Deron Williams that they’re trying to improve despite losing some key pieces this summer.