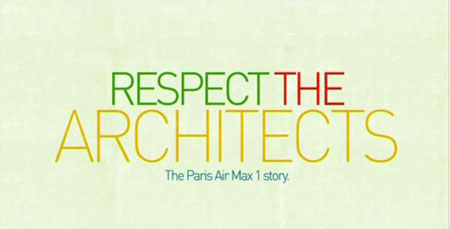 French director Thibaut de Longeville–the man behind 2005’s Just for Kicks–has directed another sneaker documentary, this time profiling the world’s best known shoe designer, Nike’s very own Tinker Hatfield. Hatfield is perhaps the most influential and respected shoe designer in the industry; he led the design teams behind the iconic Air Jordan shoe line (from III to XV) and has been with the Swoosh for 25 years.

Longeville’s film (Respect The Architects: The Paris Air Max 1 Story) is 8 minutes long, and basically looks at how Hatfield used the architectural inspiration gained from seeing the Centre George Pompidou in Paris to create the Nike Air Max 1 (one of the most popular shoes today, 20 years after its initial release). You can check out the short documentary by clicking here (low res, high res).

(Quick programing note: If you want to hear me stammer on about the Knicks, head over to The Basketball Jones and listen to the latest sexy podcast hosted by Tas Melas and J.E. Skeets. Right-click here to download the entire show.)