Return of The Links! 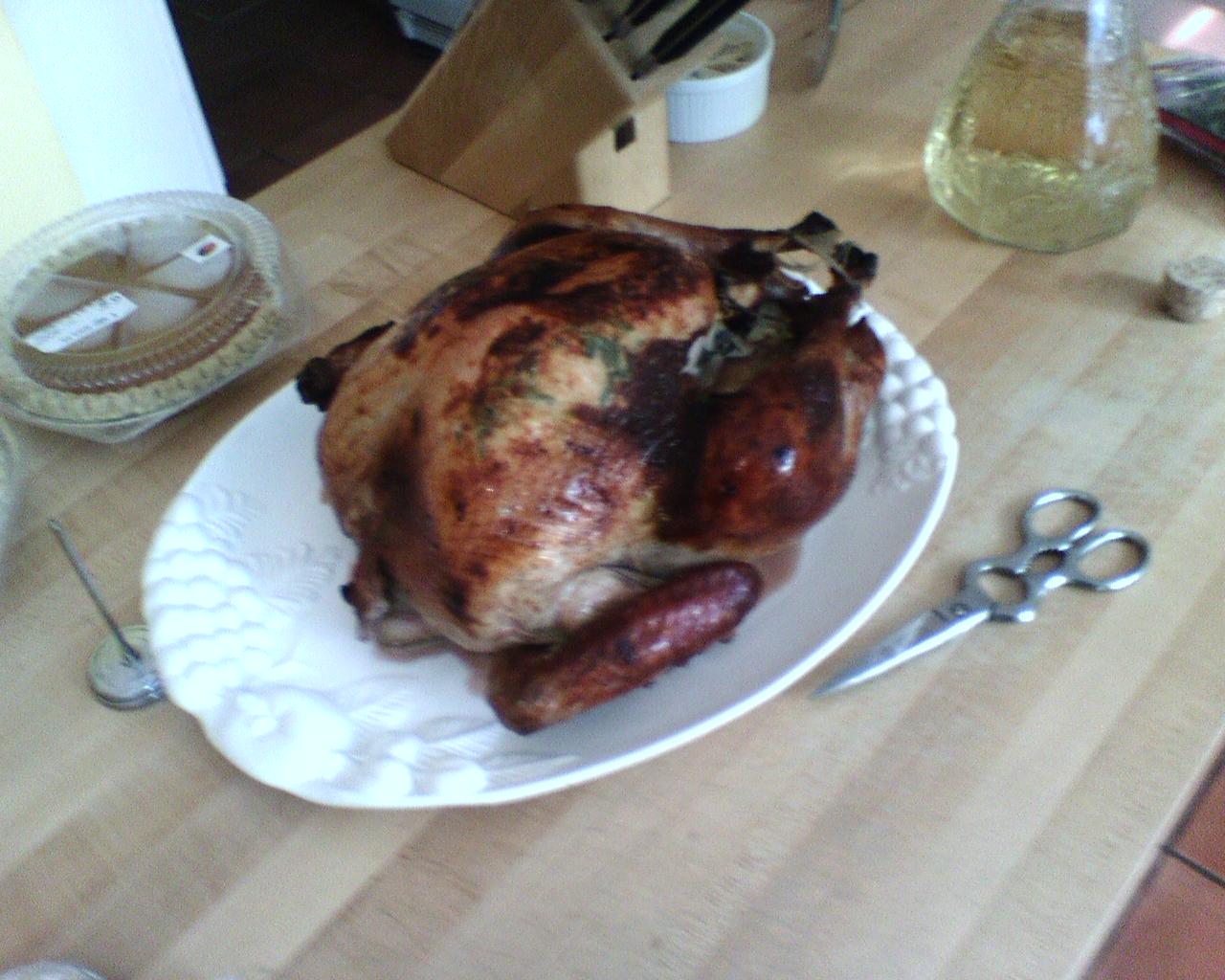 Your boy is back. Let me apologize: I’ve been in a self-imposed hiding the last week, after putting in mad travel and then going home for the holidays and having a lot of work to do. Came back to NYC and have been finishing up something for the next issue of SLAM, and catching up on my League Pass-ing. And then there’s Call of Duty 3, whic must be the longest video game ever created. I’ve been playing this thing for like three weeks and I’m still fighting battle after battle, and getting no closer to defeating the Axis.

On Thanksgiving day, I was assigned the task of cooking the turkey. Cooking doesn’t seem so tough to me, as long as you follow the recipe you’re given step-by-step and don’t screw anything up. And I’ve been cooking on the regular for the last few years, ever since I moved to NYC, so I figured a turkey couldn’t be that much more difficult than a steak or a chicken. But good gosh was it hard. Took me all afternoon the day before Thanksgiving just to get stuff ready, then I had to wake up at 9:00 a.m. on Thanksgiving morning to get the turkey in the oven. Not fun. And the turkey is such a big bird, it’s nearly impossible to get it all cooked evenly and flavored well — it’s like trying to cook a car. No wonder the pilgrims were so miserable.

A lot of people have been talking about that Hawks/Raptors game in Atlanta where they had scoreboard issues, with the Raptors being shorted two points during the fourth quarter. I was actually at that game, sitting courtside and cheering along with the other three dozen Hawks fans that were there, and I had no idea there was a problem with the score. (Neither did the Raptors, for that matter, because nobody said anything about it until a day later.) What bothers me is the talk about how the Raptors would certainly have won the game, because the Hawks were up 7 going into the fourth and spent a large chunk of the fourth just trying to run down the clock. Sure, the Raptors would have played it differently if they were down two instead of four, but what makes people think the Hawks wouldn’t have done the same things they did in the third quarter to pull ahead to that big lead?

Either way, it sucks for the Raptors fans, I understand. TJ Ford was amazing that night, zipping to the rim time after time. Why the Hawks didn’t stand back and make him shoot jumpers, I don’t know. And late in the game, after a timeout, the Hawks came out of a timeout and put poor Cedric Bozeman, bulky knee brace and all, on Ford, who immediately went right past him for a layup. I asked my friends how the Hawks can have three little, fast guards (Lue, Claxton and Stoudamire), one of whom is actually named “Speedy,” but they put the slowest guard they have on him. After the game, I spoke to Dominique Wilkins, who mentioned that, at least on that evening, TJ was “the truth.”

What else is going on with the NBA? How about the Ben Wallace/headband nuttiness in Chicago? As soon as I heard about this, I thought about what I wrote three months ago in the SLAM NBA Preview:

“The real issue I see in Chicago is with the coach, the gritty, gutty Scotty Skiles. His intensity is so palpable that you can easily imagine him screaming on the toaster first thing in the morning for burning his bread. Will Skiles’ act start wearing thin, four years in?”

The Bulls will be better than they were last year, but Ben Wallace is still talking about needing touches on offense and wanting to shoot the ball more, and he’s not going to thrilled when Ben Gordon takes his twentieth shot of the half. I also wonder how much longer Scott Skiles and his tough-guy act will last with these guys.

Seriously, who bans headbands? It’s like Skiles is running an army, which seems weird because when he was a player he was always kind of out of control (remember Skiles trying to fight Shaq when they were on the same team?). Skiles the player probably wouldn’t like Skiles the coach. And the Bulls seem debilitated by the whole thing. Seeing them in L.A. last week, in the locker room before tip-off, they were all sitting around quietly, watching Lakers footage on TV, listening to stuff on headphones. No interaction at all.

Watched the Wizards/Hawks last night, and it was pretty obvious to me that something’s not right with Agent Zero. Did you know Gilbert Arenas is 11th in the NBA in scoring (25.9 ppg), but of the top 29 scorers in the NBA, Arenas has the worst field goal percentage (shooting 39 percent from the floor)? he’s shooting worse than Iverson, for crying out loud. For a guy who allegedly spends all his waking hours working on his jump shot, something there doesn’t compute.

And yes, the Eastern Conference isn’t as good as the Western Conference, but think about it in the larger sports picture: It’s true in every sport. In baseball, the NL East was terrible, and the AL East had two miserable teams. In football, more than half of the teams in the AFC and NFC East are below .500. And in the NBA, the Atlantic Division is unbelievably bad, and the Southeast isn’t much better.

What’s strange is that the champs are from the East. St. Louis in baseball (well, they aren’t really East, but they aren’t West either), Pittsburgh in football, Miami in basketball. Can one of the new basketball stat nerds figure why this is happening?

Don’t think the NBA’s serious about this cleaning up the League business? I was talking to an NBA player last week who told me he’d recently been fined $2,500 for playing the fourth quarter of a game with a drawstring of his shorts hanging out. Seriously. And this is a guy who’s never in trouble, never been fined before.

“If I didn’t wear one, the sweat would be coming down in my eyes. Otherwise, the only thing keeping the sweat out would be my eyelashes.” — Drew Gooden, on headbands.

“There’s no damn way that anybody is going to trade Pau Gasol. I’m telling you that ain’t going to happen. That’s out the window.” — Michael Heisley, Grizzlies owner.

THE LINKS…
• Remember all the talk a few weeks about about how amazing Rajon Rondo was going to be? And remember me saying that I’d seen him a bunch in college and the kid had a worse jumper than I do? Well, everyone else has figured this out, too. Welcome to the bench, Rajon.

• I watched the second half of the Lakers/Bucks game last night to see the unstoppable Michael Redd, but the interesting part was the last play. Lakers down three, take the ball out of bounds. Kobe is guarded really well by Ruben Patterson, but Kobe still jacks up a jumper from about 32 feet out that completely misses the rim. Game over. I couldn’t believe that was the play Phil Jackson had drawn up. Turns out it wasn’t: Lamar Odom was supposed to shoot that shot.

• Carmelo’s energy drink debuts Friday in Syracuse. Enough with the energy drinks, guys. If someone really wants to be next level they should introduce their own coffee.

• TJ Ford has bunions. And in other medical news, behind the scenes of microfracture surgery.

• We know Ben Wallace is grumpy in Chicago, but why isn’t it bigger news that he has sprained ligaments and chipped bones in his hand?

• Dave D’Allesandro on how to fix the Nets.

• T-Mac is down with a bruised abdomen. And Dikembe Mutombo apparently took out Juwan Howard during practice.

• Nice of Bob Hill to try and lift Rob Swift’s spirits. No wonder all the guys on the Sonics don’t like Hill.

• Mike James left Houston because they wouldn’t give him a no-trade clause, but he left his heart in Texas.

• The only Cavs player who would break a team rule and wear a headband? Ira Newble.

• When the Pistons go to Miami, Dale Davis is going to a different court. Put away the tasers! His lawyer says there’s video of the incident — when can we get that on YouTube?

• The BETCats have signed the man with the best custom Air Jordans in the NBA.

• Now that the Clippers are under .500, they’ve decided to demonstrate their committment to mediocrity and re-up Mike Dunleavy.

• There’s a really long Eddie Griffin story in the Philly paper today that basically rehashes all the same old stuff.