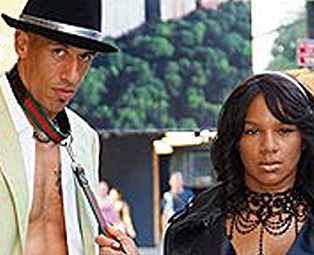 After reviewing the third episode of “Committed: The Christies,” even I needed a break. Watching this show and keeping notes requires immense concentration, and I find myself constantly flipping back and forth, rewinding and fast-forwarding, to make sure they really just said what I thought they said.

Also, while I was watching the shows last night I was looking at JackieChristie.com and noticed a link called “The Haters Club.” I clicked on it and found a list of, I suppose, haters.

Go look for yourself and see who’s ranked number five.

Do I get a t-shirt with that? And they even linked to the review I wrote of the first episode! Honestly, I’m pretty disappointed. I’ll admit, I was harsh about that first episode, but since then I’ve come to like the show. Really, I have. Who else has faithfully watched every episode and reviewed it (and kept it being talked about, at least by someone)? And if you’re going to base the intro of every show on having critics, don’t you at some level need critics? And if SLAM is in the Hater’s Club, then why are we also listed as place The Christies have made an appearance?

Maybe I have had some fun with the show, but that’s entertainment, right? The Christies had to know someone was going laugh when Jackie said she didn’t believe that owls really existed. And the more I’ve seen, the more I’ve liked the show. Honest. Let’s squash this beef, Jackie. We’re bigger people than that.

Anyway, facing a two episode backlog, I hunkered down last night for a double-shot of the Christies’ love…

— The show begins with a series of flashbacks from the first three episodes: Jackie is angry, Doug plays in the NBA, the media doesn’t understand their relationship, Doug is traded to Orlando, Doug developed what some call a “phantom injury,” Doug had surgery to remove a ton of bone chips from his ankle, Jackie believes in Sasquatch and Bloody Mary but doesn’t believe in owls or elves.

— Time for a wedding! Jackie starts the show by letting us in on a saying the Christies have: “If we’re always planning a wedding we don’t have time to plan a divorce.”

— Doug sits at a table outdoors with someone listed as “Stinker.” I’ve obsessively watched this show and I have no idea who “Stinker” is. Maybe Doug’s brother? I think it is. They discuss releasing doves at the wedding. Doug wonder if doves come in a dozen. Stinker says they do. Doug then says they should release “ten” since it’s their tenth anniversary. I don’t know if he means just ten birds or ten dozen, which would be 120 birds and would probably generate an unbelievable amount of bird poop. I hope they mean just ten.

— This Stinker guy seems to know a lot about doves and the requirements for releasing them. For instance, you have to release them within a certain distance of their coop so they’ll be able to fly home.

— While they’re planning this wedding, Jackie is coordinating a photo shoot for her clothing line. This is the first time her clothing line has been mentioned on the show. She’s flown in a lot of her favorite models and photographers from Sacramento to Seattle for this shoot.

— We meet three models: Alicia, Michelle and Wynona. This is quite a coincidence, because those are three of my favorite Sacramento-based models as well.

— We see what amounts to a sixty second ad for the Christies’ clothing line, set to the Pussycat Dolls’ song “Buttons.” I’m really disappointed in myself that I know that song. Jackie says “Doug did help with the selection of the models, but Doug was not involved in the photo shoot however.” Jackie says she didn’t want Doug sitting around watching models in bathing suits for three hours. I find myself upset that we don’t have video of that discussion.

— Back at the house, Doug is meeting with Jonathan the caterer, and Doug immediately says that this guy is a problem. Jackie says the caterer was “pushy” and “sarcastic,” and that he demanded things work a certain way.

— Jonathan suggests putting a few cocktail tables inside this huge empty room in the Christies house so that people will have somewhere to hang out during the reception. This seems reasonable, because otherwise you’re going to have a ton of people just standing around awkwardly. Doug acts as though Jonathan has suggested turning their house into a working brothel. Doug says, “What we should do is bring in a few stripper poles, have some girls come down…” Oh, so who’s being sarcastic now?

— Doug and Jonathan look on as construction workers build a huge geodesic tent in the backyard. Doug spots Christmas lights going up and flips out. Jonathan immediately passes the buck: “You’ll have to ask Jackie, but they…they’re pretty typical in tent set-ups though. They look nice.” Doug shakes his head and says, “I don’t know about that, Jonathan.” Doug scratches his chin and looks perplexed. Jonathan explains that a liner goes over the lights so you don’t really see them anyway, and then Jackie shows up like, What? Doug gives in immediately.

— Stinker goes to meet with a woman about the wedding cake. Completely uneventful.

— 45 hours before the wedding, and Jackie still doesn’t have anything to wear. She can’t tell Doug, though, because he’ll be upset. She also says, “And one of my best friends can’t come because her fiancee is sick, or so she says. I think she just doesn’t want to see our house.”

— The tent is coming together well. Jackie thinks it looks cheap. “They woudn’t do this to Oprah,” she fumes. We have no idea what they’re mad about, though, because from all we’ve seen it looks pretty nice.

— Day before the wedding, and Doug says now the problem is the flower lady. Doug says they can’t say anything mean to her because she hasn’t up the flowers yet. Doug says because they have money and they’re black, people look at them and think they’re stupid, and he deals with that every day.

— A five-man security team shows up and meets with Doug. What, are they inviting 50 Cent to this wedding?

— Doug and his guys bring in the chairs from outside and start setting them up themselves. Jackie says Jonathan was supposed to handle this, but she didn’t want to wait until tomorrow to have this done. Sucks to be a friend of Doug’s right now.

— Jackie claims she selected a certain flower and the flower lady showed up with a different flower than what she selected. She asks the flower lady if she can see one of the flowers to show it to her husband. The lady gives her a flower, and as Jackie walks away she mutters, “See what I mean…lying cow.” She just joined the Hater’s List!

— Jackie is really worked up about these flowers. She shows the offending flower to Doug, and he kind of shrugs. Jackie says she wants to “smash” the flower lady with the flowers. Doug says if the flowers are the wrong flowers he’ll throw them against the wall and go get some from Safeway. Everyone’s really stressed out here, including me. I can’t wait for this wedding to be over and I’m not even working on planning the thing.

— Rain! Terrible timing. Doug says this is first time it’s ever rained on their wedding, and he jokes (I hope) that it may be related to global warming. Someone gets some duct tape and goes to work on leaks in the tent.

— Jackie: “We’re going to make it happen, regardless. We just have to explain to the guests that we messed up and hired a…funny group. I hope that doesn’t happen, but it’s in the back of my mind and I’m probably going to get a speech together.”

— Ahhhhhhh!!!!! All of a sudden we get the “Next time, on The Christies” screen. It’s over? Next episode is another half hour of the wedding again? Let me take a break and regroup before watching that.

— OK, I’m back. Watched all the NBA highlights on SportsCenter and gave serious thought to not watching this second episode of The Christies, but I’m going to go at it. I’ll do my best, like Jackie and Doug would any of us to do.

— This show begins with Doug showing Jonathan how to tie a bow around the chairs. Then Jackie shows up and says Doug’s is wrong, too, but his was better than Jonathan’s.

— Jonathan probably has Jackie and Doug on his own hater’s list.

— Jonathan tells the camera the menu he’s putting together is very similar to a lot of the things he fixed for their first wedding ten years ago. Jackie thinks Jonathan is making too much food that their guests won’t like.

— Drama! Jackie says some woman showed up outside the wedding in jeans and boots, “skipping around.” Stinker says he asked around and found out she was the date of one of their guests. According to Jackie, Stinker tried to speak to the guest, and the guest flipped out, started cursing and claimed he had a gun like all their security guards. So maybe having security was a good idea. My bad.

— Stinker says he had words with the guest, and the guest threw a glass of cognac in his face. Apparently none of this was caught on film, by the way.

— That settled, Doug goes out to work the crowd. It seems to be warm, because Doug goes out for there for a few minutes while carrying his son, then has to go back and throw his shirt into the dryer.

— Jackie says there was an incident in the house earlier where the head chef from the catering company was drunk and reeking of alcohol, so they had to let him go. Jonathan ends up doing all the cooking. Serves him right.

— Finally, the wedding is taking place. Jackie gets ready to walk down the aisle, and the music that plays over a montage of clips from the first few episodes is that song from a few years ago, “I’m a Bitch.” (Lyrics include: “I’m a bitch/I’m a lover/I’m a child/I’m a mother”) Let’s just say that Jackie is a complex woman.

— Jackie starts to give a speech during the ceremony, and Doug completely breaks down crying. Jackie says she knows she gets on his nerves sometimes, but she thanks him for building a life with her and loving her.

— Doug pulls out a comically long list of notes from his pocket, and everyone has a laugh. He says she changed his life, then he breaks down again and I can’t really tell what he’s saying. He ends it with I love you. Cut to outside the house, where a box is opened and six doves fly out.

— Later on, as a jazzy version of “Love and Marriage” plays, Doug stands alone in the hallway sweeping up rose petals. Such is life, such is life.