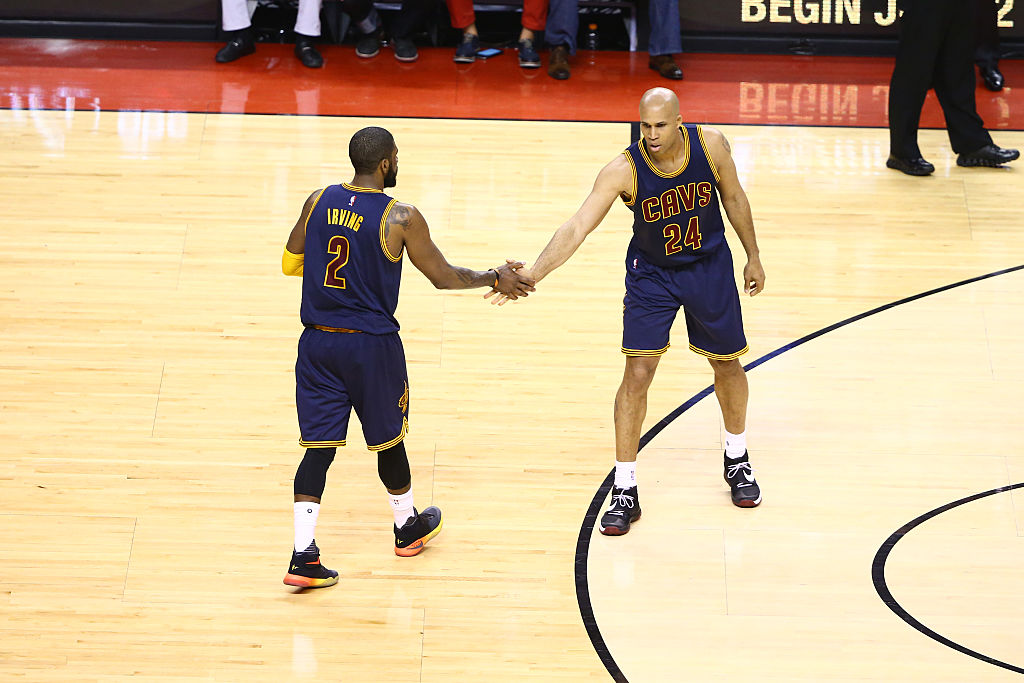 Richard Jefferson seemingly found out about Cavs teammate Kyrie Irving wanting to play elsewhere the same way much of the basketball world did, but for Jefferson, the news did not exactly come as a shock.

Jefferson added some perspective to Irving’s situation, and explained why the 25-year-old superstar might feel it’s time to move on from Cleveland.

Jefferson says there is no power struggle between Kyrie and LeBron James.

Per Yahoo (via the Road Trippin’ podcast):

“Am I in the know?” added Jefferson.” This is what I will say about this, and by the time this gets out and whenever we air this in a few days, I don’t know. I don’t feel like there’s a power struggle with LeBron and Kyrie and [Kevin Love]. I think Kyrie is a hyper-intelligent kid — really, really smart, doesn’t get enough credit for how smart he is — and I think seeing that the franchise is in flux, I think seeing [Cavaliers GM David Griffin] leave and the amount of coaches, I think Kyrie has had a much tougher time in this stretch of the organization than anyone ever really wants to fully [realize].

“He was a No. 1 pick right after LeBron, then he has three different coaches, then LeBron comes back, now there’s trade rumors, now it’s ‘LeBron’s leaving.’ At some point in time, anybody would want some sort of stability, even if it’s the unknown. I don’t know if he asked to be traded. I don’t know this, but I will say that he’s had a tougher time, if you look at his start to where we are right now, of the ups and downs of a franchise, more than most. Even though we’ve been successful and even though we’ve won a championship and he’s been an All-Star, there’s still so much of a wave, and to be like, ‘Yo, we’re going to sit here for a whole year on whether or not LeBron’s coming back,’ that’s got to be tough on anybody — everybody.”

Instead, Jefferson was hit with the bombshell just like the rest of us, scrambling to rationalize Irving’s trade demand, before changing the subject, enjoying a Corona and talking about [podcast guest Lindsey] Vonn’s herd of cows.

“I think Kyrie knows how important he is to our team,” said Jefferson, who revealed plans to play one or two more seasons. “LeBron knows how important he is. He’s been on this podcast. They’ve been on this podcast together, multiple times, where Bron was like, ‘Dude, this is my guy. I need him. He is so important to me. My kids love him.’ And, again, just like any family, there are ups and downs. There are moments that you hate them, moments that you love them, and then you just kind of keep it moving.”