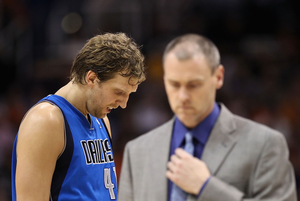 “I think there’s a certain criteria where you can say pretty much for certain that he’s one of the top 12 all time,” Carlisle said.

“And that is, there’s only been 12 guys that have been 10-time All-Stars, [NBA] Finals MVP and league MVP. So I think that firmly puts him in the top 12. And then getting into the top 10 in all-time scoring validates that even more.”

“He’s got a lot more good basketball left in him,” Carlisle said of Nowitzki. “A lot more great basketball. So I think he’s going to pick off a few more guys going up the ladder. And if you look at his career and the way that he has played his game [and] the fact that his game is such a radically different game than any 7-foot-1 guy that we’ve ever seen, he’s been a game-changer. … He’s been a monster in this game and he’ll only continue, I think, to gain respect as time continues to go on.”

Praise continues to pour in for the big German, who bounced back — averaging 21.6 points and 6.2 rebounds in his 16th season — from a sub-standard 2012-’13 campaign. San Antonio Spurs head coach Gregg Popovich argues that Dirk is perhaps “the best pure shooter we’ve ever seen.”

Which is pretty decent company for Dirk Nowitzki.