Rick Carlisle Wants Ron Artest Back in His Life 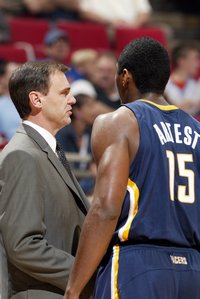 The enduring image – the one that will remain with us forever – from the brief Rick Carlisle/Ron Artest marriage in Indy is that of Ron Ron pummeling Detroit Pistons fans in their seats.

Despite that, Carlisle sounds like he’d be more than willing to give coaching Artest another shot, this time in Dallas.

“Of course,” said Carlisle, who coached Artest in Indiana. “This guy is one of the real difference-makers that we have in this league. He’s had one all-star year; that’s when he played for me. I’ve had a chance to reconnect with Ronnie a couple times over the last couple of years. I love him and I love his family, so yeah. This guy was one of the most physical, intimidating players that I’ve ever seen at the small forward position, so he’d be a player that any team would want to have.”

Rick’s candidness shouldn’t come as a surprise, as the Mavs are believed to be looking to move Josh Howard this summer.

The Kings are loathe to unload the talented Artest, but his tenure in a Sacramento uniform is a day-to-day adventure. Getting a guy in return (Howard) who can not only play, but simply wants to be left alone with his blunt, might not be such a bad deal.