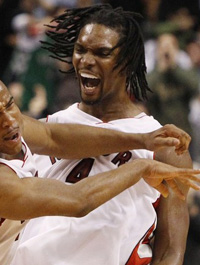 Earlier this month Chris Bosh became the Toronto Raptors’ all-time leading scorer in a win against the Spurs – News to some, older news to others. Since that Spurs game, the Raps have won six of ten games in January with only three games remaining. Keep in mind this write-up isn’t about the milestone itself, or how it helps bury another trace of VC’s past.

I’m not going to write about how it’s proves little in a franchise that’s only 15 years old, or how it’s more meaningful than it is. I won’t boast Bosh, or praise a team that before their improvement was becoming one of the worst defensive teams in NBA history. What I will do is map out a player that has been subject to so much criticism in his seven-year career that it takes a RuPaul joke for anyone to take notice. If you’ve followed Chris through his time in TO you know how much media attention he receives north of the border, and how little attention he attracts from the US. These days it’s different. Bosh gets buzz… so big, he can probably sell a blank disc. Mainly because out on the court this season, he looks more like the brontosaurus he resembles – massive. Unlike any other season, Chris has started strong and improved on it.

His stellar play must have rubbed his teammates the right way because the Raptors have garnered attention with unlikely wins over the Spurs, Magic, Mavs and most recently the Lakers. An average of practically 24 points and 11 boards has him as the only player in the top ten in scoring and rebounding. And in a season that may be his last as a Raptor, CB4 looks to be at the pinnacle of his game. Some of his skills have flourished, but most of them were always there, just as untapped ability. Listed below are weaknesses that held Bosh back his entire career. Some of these facets have changed this season, and he may never look back on them.

THE JUMPSHOT
You’ve seen it time and time again. Mike James/TJ Ford/Jose Calderon/Jarrett Jack feeds Bosh on the outside of the key. Ball at his waist, he faces his opponent up. After a couple ineffective stutters of his pivot foot he rises up for the shot. Now it’s no secret that Bosh can make that shot. After all, it’s a staple in his repertoire. But how many times have we been shouting at him to drive the ball on the slower, more stationary big man in front of him? CB is just as successful (if not more effective) driving to the rim in place of his jump shot. A foul or finish is usually the outcome. Finally we can stop shouting at the TV. Currently, Bosh ranks in the top five in total FTM and FTA.

TOO SOFT
The Raptors have a history of being as tough as a housecat wearing a cone. Since Bosh is the face of the franchise (sorry Hedo), he represents Toronto’s attitude. And for many years that attitude said, “this team is your doormat.” However, in the current 09-10’ season, CB and his team carry themselves with a little more grit than they used to. Although we haven’t seen grill-to-grill action, it’s easier to see a more hardened side of Chris. Besides Paul Pierce wishing him a happy new year with a knee in the Dick Bavetta, he’s displayed more ferocity and emotion than ever before. A good example? Check the jam he threw down on Sheldon Williams.

NOT A CLUTCH PLAYER
Since Morris Peterson’s departure to New Orleans in 2005, the Raptors struggled to find their most reliable player in crunch time. As the face of the franchise, Bosh was often called upon for big time shots. Shots that he just couldn’t sink. Perhaps other forces were to blame in some cases, but in most cases, Bosh didn’t have the mojo. Colangelo and company tried to address the issue by signing Hedo Turkoglu in the offseason, which has proven to be a disappointment in Raptorland thus far. Surprisingly, Chris has risen to the occasion hitting daggers against the Spurs and Sixers. A couple clutch shots doesn’t shed his rep for folding under pressure, but it could be a sign of what’s to come.

SECOND OPTION
The haters out there believe Bosh is not a leader. They think he lacks the fire to really throw his team on his back, and therefore should only be a complementary player. Now that Andrea Bargnani has grown into the shoes of his number one pick, Bosh gets to compete like the leader people expect him to be. Point being, all leaders need support to succeed in the League and the support Bosh is receiving appears to be a key reason why he’s excelling. Whether you consider CB as a leader or not, he’s leading by example. Few teams will find a Gasol to their Kobe, but the pieces are forming to maximize Bosh’s potential.

WHERE’S THE FIRE?
It’s still to early to determine if CB4 has let the lion out of the cage. His approach has been bubblier since the 09-10’ season began. His attitude has been questioned all along for being too passive and people believe any true competitor is feared. So can Bosh be intimidating enough to his opponents this season in order to command the level of respect he deserves? When someone comes looking for their doormat will he be there to send them off? People want to see Bosh get angry. Then translate that emotion to produce results. They want to see him stick up for himself, and his teammates. If he can learn to take his frustrations out on his opponents instead of the referees, he will be dangerous.

The points above are some of things Bosh has taken heat for all these years. And now, nearly halfway through the first season of the decade Bosh seems to be doing what great players do – address their weaknesses, and improve on them. Call it a turnaround, but you can only speculate why Bosh believes now more than he ever has. Is he aware of what free agency will bring next summer? Maybe he’s trying to better prepare himself for the drooling execs that are headed his way next summer. Whatever the case may be; Bosh didn’t come into the League with everyone expecting him to take the NBA by storm. That was Bron’s duty. And Melo. And Wade. Bosh arrived quietly. The same won’t be said when he leaves.