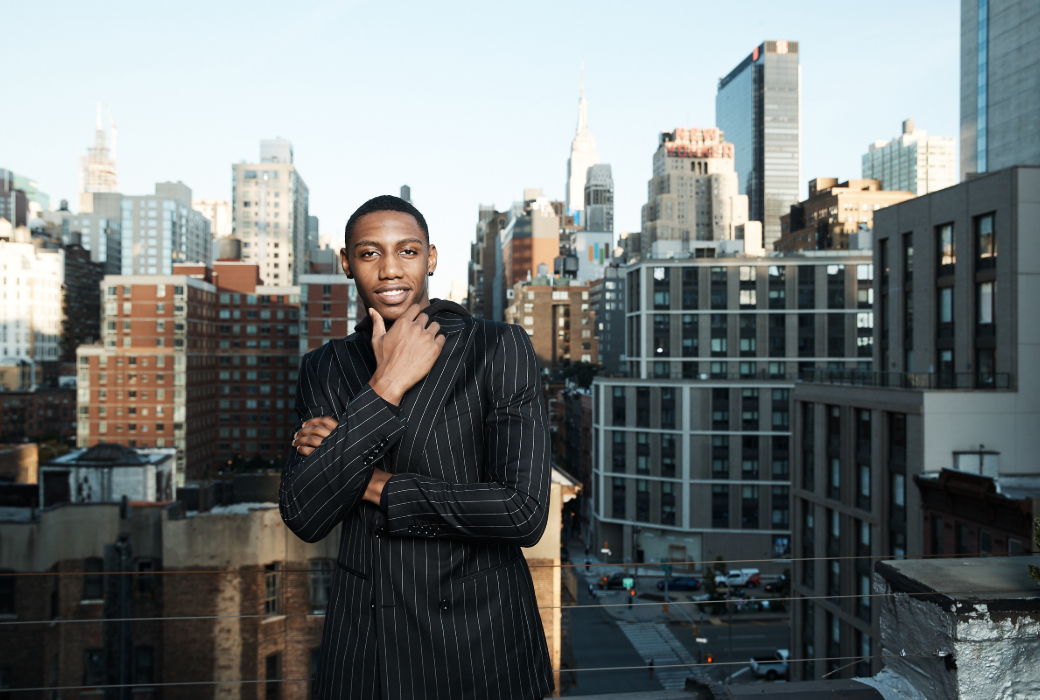 “Man, I’m just excited,” RJ Barrett says. “I finally, really, get to play in the NBA. A long dream and I’ve worked really hard for it, so very excited.”

It’s a Monday evening, roughly 48 hours before Barrett is set to make his NBA regular season debut. He’s just wrapped a long practice and is now making an appearance at the INDOCHINO store in Midtown Manhattan. Partnering with the brand, Barrett is introducing his first suit collection, a limited-edition line that he personally styled. Expect to see some of it in the tunnel (…runway, shouts to @leaguefits) entering Madison Square Garden this year.

“This is my first opportunity to develop a custom collection, and it’s been an incredible experience working directly with INDOCHINO to create this elite line,” Barrett explains, while standing beside the collection. “I’m proud of what we’ve created and look forward to sharing it with the world.

There are little design details in each suit that speak to Barrett’s journey. On the inside lining of one blazer is his number (9), which he shares with his father, and a king-and-queen crown that represents the importance of his entire family in getting him to this point. Another has his signature emblazoned on the fabric.

After addressing the crowd, Barrett sits down with SLAM to further discuss his style and look ahead to his rookie campaign.

SLAM: How would you describe your style in general? Are you going to be rocking mostly suits to games?

RJ: It’s my first year so I’m going to try a variety of things. One day I’m gonna come in a suit. One day I’ll come in sweats. I’m just going to be switching it up.

SLAM: When it comes to fashion, who’s a player that you draw inspiration from?

RJ: One of my friends: Shai Gilgeous-Alexander.

SLAM: How would you describe the identity of this year’s Knicks team? What can fans expect from you guys this season?

SLAM: Since the Knicks drafted you, how much have you dived into the history of the franchise?

RJ: I’ve known a couple of things from when I was growing up, because my grandpa was a really big Knicks fan. I grew up watching re-runs of the John Starks and Patrick Ewing days all the time.

SLAM: Is that motivation for you, seeing how crazy the Garden has been in the past?

RJ: It’s definitely motivation. We’re trying to get the Garden to be like that again. As much as we can, anything we can do, we’re gonna do it.

SLAM: Over the summer and through preseason, what part of your game do you feel like has improved the most?

RJ: It’s kind of weird when it comes to the NBA, especially now, it’s like you gotta learn more about pace. It’s not even about if you can shoot, it’s about if you can slow down and how to be effective in that kind of way. So I feel like I’ve just improved a lot on defense this year and really in all areas of the game.

SLAM: As you’ve been adjusting to the League, what’s been the biggest surprise for you, either on or off the court?

RJ: The amount of time and dedication, the amount of hours that NBA players really put in. From the outside looking in, all you really hear is, ‘Oh the NBA guys don’t practice. The NBA guys don’t practice.’ But for real, especially like us, sometimes we’ll be in there all day just working. We got so much stuff to do, and when you need to get better, you need to be disciplined at your craft. So I would say the work ethic is crazy.

SLAM: What’s been the best advice you’ve gotten about the transition to the League and who did it come from?

RJ: Best advice about the transition? I’ve gotten a lot. I talk to Steve Nash a lot. He’s my godfather so I talk to him all the time. Really, he just told me to be confident and be myself and back to work ethic again. You know, just work hard. You get out what you put in.

SLAM: As the season gets underway, what message do you have for Knicks fans?

RJ: Knick fans, I love y’all, and we gonna be fighting for y’all every night.

The RJ Barrett collection will be available online and in all INDOCHINO locations on October 24th. More information here.

Photos via Getty and INDOCHINO.