RJ Not Exactly Thrilled With Trade to Milwaukee 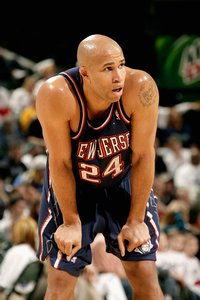 Last week, the Nets began to prepare for the summer of 2010 (AKA: LeBron’s free agency) by practically giving away Richard Jefferson. In return, they got a tantalizing (but unproven) talent in Yi Jianlin, and the corpse of one Bobby Simmons.

Jefferson, who had played his entire career with the Nets, is not happy with the trade. Sayeth Nets President Rod Thorn:

“He didn’t seem very happy,” said Thorn, who emphasized yesterday he had not yet spoken to Jefferson.

“I spoke to his agent, I called him, texted him. I like Richard. He was here for a long time and I’m sure he still expected to be here. Unless you are the one pushing for it, it’s always difficult when you are traded. You are going to a new place, have new teammates. It’s hard at first.”

Cheer up, Richard. You’ll be playing in frigid Milwaukee, and your coach will be the ball-busting Scott Skiles. Oh wait, never mind. You’re right to be miserable. Carry on.

Jefferson played in 489 games as a Net, and leaves with career averages of 17.4 points and 5.4 boards.