Roads? We can’t win on roads. 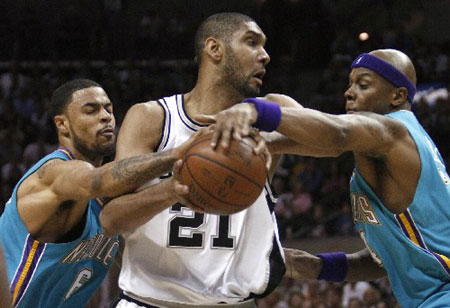 Thank you Pistons for winning a road game, you are the only team I respect. And this was sans Chauncey!

The assorted individual series coverage is coming, but a quick look at where we stand: Everything is 2-2 except the Pistons-Magic, the Cavs have a chance to make it 2-2 tonight (2nite), and Kobe’s wife wore a tutu.

There’s an old saying “A series doesn’t begin until a home team loses.” I’m not sure who said it, but he or she is right. Somebody will slip up. Choke. Collapse. Melt down. Another big playoff cliche is that “Superstars will always get their numbers, but the role players get a lift from the crowd at home.” Why is that? There needs to be an investigation. Oh speaking of investigation…

The weekend happened to produce two major stories, the D’Antoni hiring and the OJ Mayo thing, so I banged out a few other newseses for you. The Mayo thing, you really had to see the ESPN Outside the Lines to truly appreciate how much time and effort went in to “catching” him. They had live action of a game with OJ at the free throw line, then a hard pan to the crowd with Rodney Guillory sitting there watching. The piece was confrontation after confrontation, no comment after no comment. It made me feel uncomfortable. But in every story, there are heroes and villains. Louis Johnson, a former part of OJ’s inner circle, was the main informant (yes, informant! It’s that serious!) who told ESPN that his reason for speaking up was that he just cares so much about OJ. So emotional.
There’s plenty of guilt to go around, and USC continues to amaze. One of their most famous alumni is thought of as a wife murderer. He (allegedly!) admitted it recently but only when he was drunk and high. Lovely. George Lucas went to USC, did some great writing and directing, but his neck fat disgusts me. Reggie Bush was “caught” by Yahoo! in a similar scandal to OJ’s, and he’s been underachieving in the NFL, but has parlayed his fame into life with Kimmy. She seems to be a terrible human being from afar, and my most vapid friend met her once and called her the most vapid person he has ever met, but she also has her positive traits Hello!

As far as basketball goes, USC is not a major basketball program. Their geographic rival is one of the gold standards. USC is never going to be better than UCLA, so they might as well get some notoriety. It’s not like USC has this grand pristine tradition. If they got put on probation for a few years, would it really affect anything? I’d go there to study film right now if I could. Okay, I’m bored of that whole issue now.

Wow, James Dolan. You truly are the king! Mike D’Antoni is a great coach. He has had a lot of success, albeit no Finals appearances and he tried to go against the oldest rule in the book “defense wins championships.” That’s a lot like Dolan, who does everything 100% wrong, I’m not trying to be a jerk here, it’s just a fact. I find James Dolan’s brain to be a fascinating and scary place. Let’s examine the thought process.

1. Knicks are beloved and successful when they have strong defensive team.2. Bring in players who don’t play any defense.3. Wait for fans to get angry about lack of defense.4. Bring in coach who was succesful by not caring about defense.

Amazing. But look, the Knicks will have a high lottery pick. If David Stern does his thing, it will be the #1 overall pick, and then they go get Beasley, and D’Antoni has himself a new Amare. The Knicks will be much improved this season, just because how they could not be? D’Antoni is a great coach, but it definitely does not fit with the whole “We are rebuilding, we will have patience” bill of goods they’ve been selling. Hey, maybe it’s because the Knicks salary cap is so messed up that they can’t sign any overpriced free agents, so Dolan needed to buy a high priced coach.

Welcome to NY Coach D’Antoni. I went to a Mets game the other night and a beer was EIGHT DOLLARS! Don’t spend your mega-deal in one place.

Oh wait, Donnie Walsh is calling the shots. Yeah, he had a great run. A few press conferences and interviews, kept Isiah around, didn’t do any work, the end.