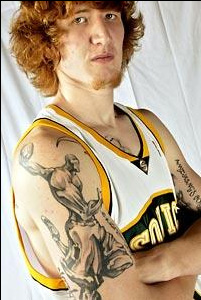 I was flipping through the NBA newspaper websites today when I got to the Seattle Times, and I was met with this picture of Robert Swift:

I actually unleashed a loud “Whoa!” that echoed down the hallway here at the SLAM Dome. At first I thought Swift was in costume, perhaps as a terrible rapper or something. But no, “This is who I am,” Swift says, quoting from a Reebok commercial.

Yeah, so apparently Rob Swift, who used to be all crew-cutted and clean-skinned and quiet has made a few changes. One year ago they called him Napoleon Dynamite, but now he’s put on muscles, grown his hair out, added 15 tattoos and a scraggly goatee.

This is who he is, he says. Hopefully the rest of “him” won’t be so derivative of ad campaigns and music videos.