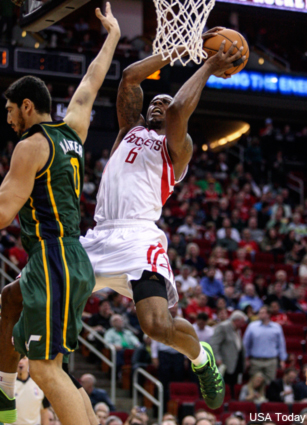 After the Bobcats led by 4 at half, the Hawks outscored their hosts by 14 points in the third quarter and cruised to an easy double-digit victory. Ever since the Hawks lost 14 of 15 games to plummet from the 3-seed in the East to the 8th, Atlanta has now won four-straight games. Many of its players, like Kyle Korver, feel that the team is healthier and back to its earlier season form.

Atlanta’s defense is what’s truly improved. The Hawks held Charlotte to just 35.3 percent shooting and shut off the paint. This dunk attempt from Gerald Henderson helped that cause:

We all know Kemba Walker loves March. He dropped 20 points and dished 7 dimes in the loss. Paul Milsap led the Hawks with a game-high 28 points.

For some reason, this terrible Sixers team just gives the Pacers fits. It’s likely because Indiana just seems disinterested by them. Paul George was just nonchalantly chucking up fade-away step back jumpers and Roy Hibbert, frankly, played soft in the paint. The only Pacer who came to play from start to finish was none other than Lance Stephenson who shot 8-16 from the field en route to 25 points and 5 rebounds.

George still finished with 24 points and this monster slam:

But you have to worry that the Pacers are on cruise control even though they just won 50 games for the first time since 2003-04. On the other side of things, the Sixers lost their 21st straight game, setting a franchise record. Philly is just 5 games shy of tying the NBA’s all-time losing streak record, 26, set by the Cavs back in 2010-11.

Phoenix and Brooklyn began their seasons in totally opposite sides of the spectrum. The Suns, who were supposed to challenge for the worst record and tank for the No. 1 overall pick in this June’s draft, went 19-11 in before the calendar flipped to 2014. Conversely, the Nets were expected to compete for the Eastern Conference title but began the season 10-21 before the New Year.

Come January, their stories flipped. Phoenix has struggled, after losing Eric Bledsoe for 6 weeks, going 19-18 in 2014 and falling out of the Western Conference playoff picture. Brooklyn is 24-10 since Dec. 31 and has surged from one of the bottom-five teams in the league to snag the 6-seed in the East if the playoffs started today.

You bet the Nets beat up on the Suns tonight to keep that script alive. Sean Livingston dunked on everybody while scoring 12 points and adding 5 assists

Deron Williams flushed home his first dunk of the season while going for a game-high 28 points:

Phoenix’s free-flowing offense that looked so pretty early on has started to dwindle. Goran Dragic looks exhausted at the end of games. Bledsoe isn’t quite back to his November form. Gerald Green is still balling, however:

But the Suns have lost 4 of their last 6 and are 1.5 games behind Memphis for the 8-seed out West. Jeff Hornacek’s club needs to pick it up.

Are the Thunder really better without Westbrook? Let’s look at two games from the Thunder this week:

Game A was the Thunder’s loss to the Mavericks on Sunday, Game B was OKC’s big win in Chicago on Monday.

Russ’s biggest impact? OKC’s fourth quarter offense. After a Taj Gibson jumper with 10:00 left cut the Thunder’s lead to 76-75, OKC called time and emerged from Scott Brooks’ huddle on a 18-3 run over the next 7:27 before Thibs called time. Over that stretch, Russ had 3 points and 3 assists including a sick dish to Durant for a monster jam following a pretty screen and roll. KD had 35 points on 11-21 shooting while Westbrook as 17 points on 5-14 shooting and 9 assists.

Even with Dwight Howard missing his first game of the season, Houston still cruised to a 38-point victory. That was not a typo. Houston shot 58.2 percent rom from the field and 52 percent from downtown. Terrence Jones had a game-high 30 points, while adding 4 blocks, and looked very comfortable dribbling to the rack out of the high post. Omer Asik stepped in and posted a double-double of 12 points and 11 rebounds and 1 big block on a Jeremy Evans dunk attempt in place of Howard. Houston’s ball movement was impeccable, with the Rockets often having all five players touch the ball in the half-court before scoring. Kevin McHale’s club finished with 31 assists on the night

There was no luck of the Irish for the Celtics on Monday. Boston gave Dallas all it could and even made it a one-point game with 21 second left on an Avery Bradley steal and flush. The Celtics kept battling all throughout the final frame, but the Mavs repeatedly had an counter punch, like a huge lob from Devin Harris to Brandon Wright:

The C’s have now lost 5-straight games, but they’re at least playing competitive ball. Monday’s L comes less than 24 hours after Boston took New Orleans to OT before falling 121-120. Meanwhile, Dallas now holds a one-game buffer over the Grizzlies for the 7-seed in the West.

The Clips and Nugs were pretty much deadlocked throughout the contest, but just when it looked like Lob City was getting ready to take over on a 8-2 run in the middle of the third quarter, Ty Lawson’s 5-point play quickly quelled that momentum. Lawson banked in a three-pointer as the shot clock buzzer sounded with 8:37 left in the period. Chris Paul got called for a foul on the play, giving Lawson a four-point play opportunity and then CP3 was also T’d up to give Denver a quick 5-0 run while the clock was stopped. It seemed like Clippers never recovered from that sequence outside of this beautiful lob:

In the fourth, the Clippers offense grew stale and often resulted in several Blake Griffin 20-footers at the end of the shot clock, many that he wanted no part of taking. Man does Doc Rivers need J.J. Redick back.

It was all smiles for Denver: