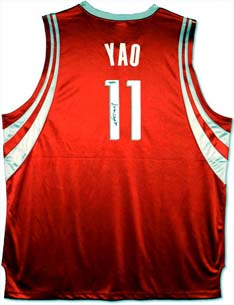 SLAM: The Rockets loaded up the summer by adding a number of key players. How excited should their fans be at this point?

DH: Cautiously optimistic. Shane Battier, Vassilis Spanoulis, Kirk Snyder and Steve Novak are all good additions and expectations are even higher with the recent addition of Bonzi Wells. The Rockets should have a strong defensive starting lineup and if the end of last season is any indicator, Yao Ming looks ready to explode. However, it still all hinges on Tracy McGrady’s health. Houston fans who watched McGrady last season are still fearful that one errant landing or bump in the lane could throw out T-Mac’s back and, by extension, the Rockets season. Health is still the primary concern.

You’d have to think that Jeff Van Gundy is on the hot seat this upcoming season, right?

I believe so. I don’t think anyone should be looking at Jeff Van Gundy as if he’s been a major disappointment so far, but I believe that if the team struggles, all eyes will be on him. You can’t blame the rash of injuries last year on JVG, but when you follow that up by trading a top lottery pick for a “win now” player like Shane Battier, you have to produce – injuries or not. It’s his fourth season in Houston so I think he will have to win a playoff series in 2006-07 to survive.

If McGrady and Yao can stay healthy for the whole year, how high is this team’s ceiling?

Very high. Both players can be dominant and require double-teams while they have great chemistry — they love playing with each other. But with that said, like any stars, they still need the right supporting cast. The current squad has the potential to be a great defensive team, but I believe that they need better three-point shooters considering they are a mostly a half-court team centered around Yao. They finished the 2004-05 season with a 35-14 record because of just that kind of three-point shooting success around the Rocket duo.

Those grey warmup suits the Rockets wear. Worst thing ever?

I’m not sure anything can beat the NASA knockoffs the Rockets wore in the late 90’s nor the hot dog stand scrubs the Houston Astros wore in the 80’s.

Alright, enough foreplay, how will the Rockets fare this season?

Both their conference and division are very strong. Assuming that Tracy McGrady can return to form and that both he and Yao can stay healthy all year, I’m going to say 51 wins and the 5th seed out West.