Rockets-Warriors Tickets Are Most Expensive For Conference Final This Decade

The Houston Rockets and Golden State Warriors are no strangers. In fact, regular-season matchups aside, the teams have met in the postseason – including this year’s Western Conference Finals – three times since 2014. The Warriors have won every time. 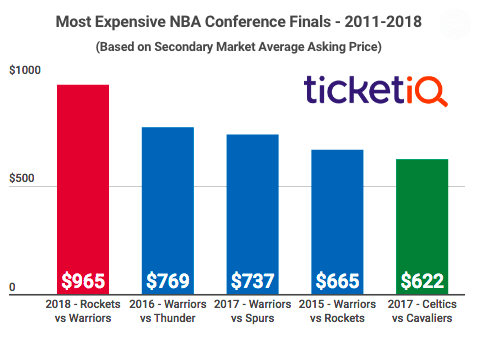 The Western Conference has consistently outpaced the Eastern Conference in demand. The highest historical average asking price for an East Final on the secondary market was the 2017 Boston Celtics–Cleveland Cavaliers matchup, which at $622 is the fifth-most expensive of the decade.

A ticket to see the Warriors at home in the West Finals has the highest asking price of the decade — $976 — while a ticket to see the Rockets at home ranks second at $957. That said, fans can get into the game a bit cheaper – the Warriors get-in price of $198 ranks No. 3 since 2011 while the Rockets get-in of $175 ranks No. 5. The teams own the top five spots in terms of highest average asking price for Conference Final home games since 2011.

Golden State has won the last two playoff match-ups 4-1, eliminating the Rockets in the opening round in 2016 and in the Western Conference Finals in 2015.