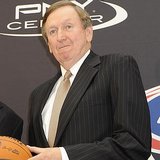 With rumors swirling that he was unhappy with the new leadership in New Jersey, Rod Thorn stepped down from his position as longtime president of the team, and briefly “retired.” Until the Philadelphia Sixers came calling, that is.

Thorn will take over in Philly, but current GM Ed Stefanksi is expected to keep his job with the organization.

The 76ers plan to hire Rod Thorn as the new team president, according to an NBA source. Announcement of the hiring will come today, according to the source. It appears Ed Stefanski, who was hired as the Sixers’ president and general manager in December 2007, will continue solely as the team’s GM.

Thorn was president of the New Jersey Nets for a decade. In his second season, 2001-02, the team reached the NBA Finals. Thorn and Stefanski, who was named the Nets’ GM in 2004, worked together for six seasons in New Jersey.

According to the source, the two sides reached an agreement yesterday, after chairman Ed Snider reached out to Thorn. Thorn left the New Jersey organization earlier this summer, not long after Russian billionaire Mikhail Prokhorov took over the franchise.

Stefanski and Thorn had previously worked side-by-side, in Jersey.