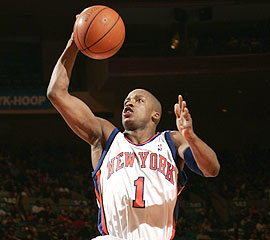 -Yesterday, Ron Ron said he’d like to retire as a Sacramento King. Today, he says he’s not so sure about that.

“I’ll do whatever my agent (Mark Stevens) wants, really,” Artest said. “I mean I like it (in Sacramento), you know, but who knows…I’m not going to put myself in a position where I say, ‘Yeah, I want to stay here (in Sacramento) all the time.’ I trust (my agent).”

Oh, Ron. How much duller would our lives be without you?

-The Blazers have waived Steve Francis and he is now an unrestricted free agent. Remember when he was a gravity-defying guard who dunked on everybody? Nope, me neither.

-Malik Rose says he got a “good vibe” from newly-minted Knick Zach Randolph after the two of them hung out in South Africa. Rose says that he (along with his teammates) is going to try and keep Zach away from the wrong crowd in NYC. Riiiight, good luck with that.

-Some are wondering why race car drivers who throw punches at one another aren’t demonized as “thugs” the way NBA cats are.

“We have been having conversations,” team president Rod Thorn said of discussions with Magloire’s camp. “He’s made the All-Star team, is a low post scorer, a tough player.”

-And finally for today, an old nemesis of mine returns. Time to sharpen my swords!