Ron Artest Is Officially a Rocket 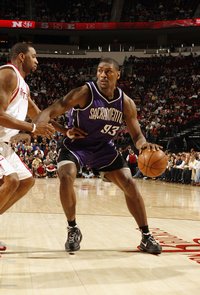 The Houston Rockets finally made the Ron Artest trade official, and they sound rather upbeat about the whole affair. In fact, the organizational higher ups see nothing but good things happening from here on out.

“In this league, a lot of guys are different when they get older and they mature,” [Rockets owner Leslie] Alexander said.

“He’s a different person now, I think, than he was years ago.”

Guess Leslie didn’t get the memo that Artest is, in his own words, the exact same person he’s always been, and has no plans to change. You might want to look into that, Mr. Alexander.

The Rockets are now talking about winning a title. While it may be way too early for that kind of chatter, Houston’s 2008-’09 season will certainly make for riveting theater. On and off the court.