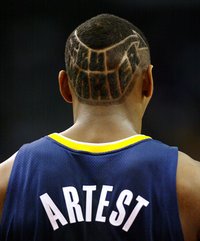 As you may have heard, Ron Ron is in Africa on a goodwill tour. In an attempt to do some much-needed image rehab, he’s letting the media in on what he’s doing over there.

He got on his iPhone and spoke to Newsday’s Ken Berger yesterday, and they talked about, well, everything: The situation in Kenya, life at home, and oh yeah, basketball.

“These people are not eating,” Artest said on his cell phone from a tent on the outskirts of Nairobi, Kenya, where he joined several other NBA players to bring food and necessities to the hungry and impoverished. “They haven’t taken showers, and the sewers are right outside their house. And it’s not even sewers with running water. It’s like a little ditch so they can throw their feces in.”

On his home life:

Artest’s wife, Kimsha, who accused him of grabbing, pushing and slapping her, is taking nursing classes in Indiana, where Artest has several homes.

“If some crazy scenario happened where I was with the Knicks, I would want David Lee there,” Artest said. “I love David Lee. I played with him in the ‘hood last summer, and he showed so much heart. They were trying to rough up David Lee, but David Lee got rough right back. And this was the projects, you know? And I respected that.”

“That’s definitely like a championship roster,” Artest said. “Zach Randolph is so good. When the Knicks got him, I was like, ‘Man, major problems in the East.’ Zach Randolph is a monster. He’s a straight beast.”

(The whole thing is immensely readable, and you should definitely check it out. I love Ron Artest interviews.)