Ron Rothstein is coaching the champs 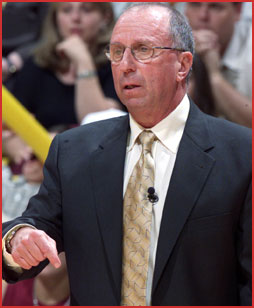 Lost in the shuffle of Pat Riley’s latest oily, snake-like escape is who the new coach of the defending world champions is going to be.

Wait a minute. Perhaps I’m being too hard on ol’ Riles. Maybe he really does have health issues. They say it’s his hip and knee. Yeah? Well maybe he shouldn’t have been doing… THIS:

It’s going dowwwwwwwwwwwwwwnnnnn. And by it, I mean the Miami Heat. Ron Rothstein. Without looking at his stats, he screams out career assistant. Then again, so were the Van Gundy boys. Upon further review… DAMN! Ron was the first coach in team history. I dug deep into the Miami Heat 488 page Media Guide. The Miami Heat, under his watch, lost the first 17 games in franchise history. Their roster was, to put it gently, a freak show of a trainwreck. Leading scorer: Kevin Edwards. At 13.8 per game. This was not a talented team, but come on. 17 straight getting off the ground? After three years, going as high as 24 wins, Ron said bye bye. The next year, the Heat made the playoffs for the first time under the legendary Kevin Loughery. Ron’s only other NBA head coaching gig was after the Pistons Bad Boys were past their peak. He had the big names like Dumars (23.5 ppg), Isiah (17 and 9), Laimbeer, Aguirre and Rodman. No playoffs though as the days of the Pistons-Bulls rivalry was passed on to Bulls-Knicks.

Funny how right as Riley steps down, Antoine Walker and James Posey are being de-activated for their failure to meet the team’s conditioning standards. Oh, and it says that Riley kicked a wall in the locker room. We’ve seen championship teams dismantled when Jerry Krause blew up the Bulls. The Heat were expected to treat the NBA season like the Chicago Bears treated NFL preseason, then turn it up for the playoffs. Now they’re shutting down vets, the guy that was credited for bringing it al together is taking a break, and… well at least Shaq is coming back. I’m sure he’s going to be really happy having to play hard in the regular season just to make sure they can defend their title. And I’d doubly sure he’s going to listen to every word out of Rothstein’s mouth. Shaq glowed about Riles constantly last season. I hadn’t heard glowing about a coach like that since… why, since Shaq and Phil Jackson a.k.a. Benedict Arnold ’06.

Good luck Ron. I hope you can work that magic like my idol, the greatest man who ever lived, Arnold Rothstein.