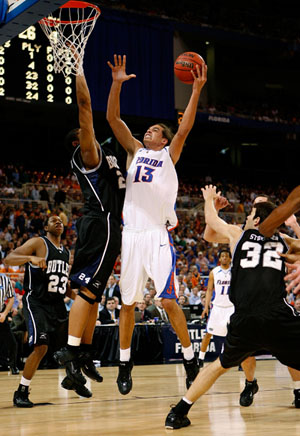 The SLAM NBA Rookie Diary has a lot of star power this year, with Joakim Noah doing the honors. Without further ado, here he is in his own words.
What’s up, everyone? I’m going to be doing this diary…
all season.

As you probably know, back in April we won our second straight National Championship at Florida. The month after that was so much fun, just a month of partying and having fun with friends. I went back home to New York City for a minute, and I realized that everybody wants a piece of you, everybody wants to party with you and see what it’s like to win back-to-back Championships. People were expecting big things from you every night, and you can’t live your life like that—you have to take care of your body. I mean, if you’re going to win and not celebrate, what’s the point? But you have to draw a line. We partied for a couple of weeks but then we calmed down and started working out again and got back in shape. I worked out with Coach Donovan in Gainesville for a while and then went out to Vegas for the Mayweather-De La Hoya fight.

Vegas was like…
the best time of my life.

We were living in dorms two weeks before that and then all of a sudden, we were ringside in Vegas! The only time I had gone to Vegas before was for tournaments and I realized then that you can’t stay more than a few days out there. After the fight we went to Tao, the club in The Venetian. I gave Mary J a hug in the club! She was showing me love! That was awesome. To me that still feels good. We went to the opening of this beach thing with Jay-Z, 50, Usher. I mean, I met Suge Knight. I was like, What up, Suge? He said, Congratulations! I was like, Oh shit! It seems like people really respect the whole story of us coming back to shoot for a second Championship and turning down the money, of us having a goal and making it happen.

Now I’m preparing for the Draft with…
trainer Joe Abunassar, and it’s a great situation.

I’m also with Corey Brewer, who’s one of my best friends and who signed with the same agent. We’re working out, staying in a complex right by Venice Beach that has some amazing restaurants, pretty girls everywhere and a pool in the complex. But we work out so hard there’s not much time for anything else. We wake up at 7 every morning, start lifting at 8. We’re eating like five times a day—Corey even put on two pounds. I’ve been doing a lot of shooting and a lot of repetitions and conditioning. Personally I feel like I can work on everything. Joe wants to get my game looking more polished, but that’s never going to happen.

From L.A. I’m going to Vancouver…
to do some motion capture stuff for EA Sports.

After that I’m going to Orlando for the pre-Draft camp. And then it’s grind time, when I start working out for teams. I have my preferences about where I’d like to play, but I realize you can’t control none of that because the teams have their preferences, too.

I wouldn’t trade everything I’ve done…
for anything.

We won two National Championships at Florida, did it the right way. We stayed in the complex with all the regular students, worked hard and it really paid off. Now I realize how easy we could have had it in terms of cashing in and going pro and stuff. But now it’s like being a freshman all over again. This is the big boys now.

Joakim’s NBA rookie diary made its debut in SLAM 110 and he’ll be with us all season.