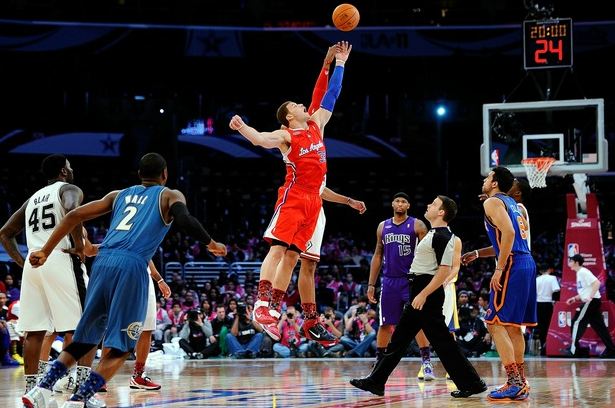 It’s not worth my time nor your time to write an entire report focused around the past two nights in the Association. The All-Star break just ended and the NBA is starting to get back on track, so there’s not many numbers to crunch. In the meantime, let’s take a look ahead and attempt to forecast the rookies during the last-third of the NBA season.

The window for rookies to go through the motions and make virgin mistakes is slowly closing. For teams in the playoff hunt, a rookie is currently either an asset

or a liability, and playing time will be allocated accordingly. On lottery teams, coaches and teammates will pamper these young guns a little more but not nearly as much as they did earlier in the year.

Although coaches and GMs don’t expect exponential growth and production from their neophytes, there’s nonetheless an expectation. Rookies have been competing all year, in both practice and games, and competition naturally breeds improvement. Coaches want their rookies to showcase progress, fit the team’s mold, and play within themselves.

(Aside: we’ll be referring to the remaining portion of the season as ‘second half’, and not ‘last-third’ to salvage flow.)

The thing is, no matter what I write here, I’ll sound like a tool. You’ve seen, heard, and read it all year; Blake Griffin is the truth. Let’s proceed.

Fresh off Rookie game MVP honors, Wall has come out of the All-Star gate scorching hot. He’s already posted two double-doubles and was two rebounds short of a triple-double on Tuesday (15, 10, 8).

With his rare mix of speed and coordination, we knew Wall was a gem, and his progress is finally beginning to seep onto the court. After watching the Rookie game, Wall reminded me of a young Derrick Rose. Not in style of play, but in terms of growth. Both started off a little rusty but occasionally flashed brilliance, and Wall is now starting to lock into his NBA mindset. On the court, initial thoughts trigger comparisons to Jason Kidd in his prime, but faster.

My buddy asked me the following question the other day, and I figured I’d pass it onto you guys: Who would you take to start a franchise, John Wall or Russell Westbrook? All interested hoop-heads answer in the comments section.

The Spurs are back atop the NBA standings, and all signs point to a deep playoff run.

To be successful, they’ll need Neal to consistently knock down 3-pointers. Neal has made his presence felt all year, most recently in last night’s win over the Thunder, when he hit four of five threes en route to scoring 19 points off the bench. Neal’s the least experienced player in Gregg Popovich’s rotation, but is among the most reliable.

They say pressure either bust pipes or builds diamonds, and the Knicks are certainly hoping for diamonds from Fields, who looked timid in the series premier of Carmelo.

No sweat though. If Fields can grab seven rebounds and hassle the other team’s best player, he’s done his job for the night. In Mike D’Antoni’s no remorse offense, when the perfect storm approaches, Fields has often been the sail that keeps the team afloat.

Likely to Play Himself Into Being a Trade Asset: Wesley Johnson

With Johnson’s impressive length and athleticism, teams may be willing to take a chance on him. Not right now, but with a solid second half, David Kahn could unload Johnson while his value is high. Johnson has started strong, posting 14 points and eight rebounds on Tuesday.

Maybe not in the near future, but with an organization as discombobulated as Minnesota, teams are likely to start calling… And Kahn will listen.

After averaging a combined 12 points in October, November, and December, Monroe’s averaged close to 11 points the past two months. His 27 point, 12 rebound performance last night should not be overlooked. This kid is improving, and improving quickly. Monroe’s offensive arsenal right now includes a smooth hook-shot, face-up jumper, and quick spin move. His strong play is making Charlie Villanueva a lot more expendable.

Most Like to Score 30 Points (excluding Blake Griffin): DeMarcus Cousins

Cousins has scored 27, 28, and has scored at least 20 points on numerous occasions. If he can stay out of foul trouble, he’s bound to drop 30 at some point this season. I wonder if Billy King would’ve traded Cousins for Deron Williams had New Jersey drafted him.

Imagine this: You’re a 7-1 rookie from Russia who looks like a 13 year-old, and speaks broken English at best. You just got overnight Fed-Ex’d to a team in limbo, with no consistent rotation or camaraderie. The man ahead of you on the depth chart is the one you hope to learn from. Problem is he’s a 7-1 native Brazilian who puts on a mean-mug and is playing for a future contract.

Your other teammates include: a former rehab patient who truly believes he’s a winged, egg-laying animal. A former No. 1 overall pick who has his ex-girlfriends lips tattooed on his neck. And Al Harrington. If Mosgov goes back to Russia next year, I think it’s pretty obvious why.

Most Likely to Morph Into Hasheem Thabeet: Ekpe Udoh

Description of someone morphing into Hasheem Thabeet: Tall, lengthy, slow, and heavy on his or her feet despite weighing 90 pounds.

Most Eager to Play: Lance Stephenson

We’ve heard Larry Bird praise Lance all year, but there’s been no playing time to show for it. If the Pacers keep winning, will they be hesitant to play Stephenson, worrying about potential chemistry problems?

Is Lance not showing enough in practice, or is he still defensively inept? I’m just as clueless as you are, but for many people’s sake, especially Lance’s, he needs to play soon. But why would the Pacers play him if they are on a roll? It’s simple.

Indiana needs to gage what Stephenson is capable of. His main buddy Larry Bird is without a contract at the end of the year, and could be elsewhere next season. If Bird goes, new front office may not put up with the patience that Stephenson requires, and we may never see him in a Pacer’s uniform. It’s a tough situation in Indy, but you can bet Lance is yearning for his chance.