Roy Hibbert Blasts the Pacers for Their Play in Game 5 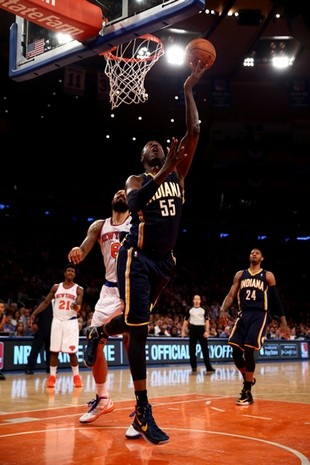 Indiana Pacers big man Roy Hibbert was fuming after his team failed to close out the New York Knicks in Game 5, going down 85-75.

Short-handed or not, Hibbert — after mustering only 9 points and 7 rebounds in thirty foul-plagued minutes — had a harsh and succinct analysis of his team’s performance — Roy said they played like “p*ssies.”

The Pacers are obviously an angry group, and they realize that nothing is guaranteed even as the series shifts back to Indiana.

Per SI and the Indy Star:

Roy Hibbert is going off: “Excuse me, all the women in here, but we played like p——s.” […] More Hibbert: “Some people were ready to go and some weren’t.”

“Just because we’re going home, nothing is guaranteed,” Paul George said. “We have to come out and really approach Game 6 as a desperation game.” Knicks All-Star Carmelo Anthony led all scorers with 28 points. George and David West had 23 and 17 points, respectively. The Pacers entered the game at a disadvantage because Hill, who scored 26 points in Game 4, is out indefinitely after being diagnosed earlier in the day with a concussion. That meant somebody outside of the core group of Hibbert, West and George had to step up. No one did.

Head coach Frank Vogel refused to blame George Hill’s absence for the Pacers’ sloppy play — Indiana committed 19 turnovers (7 of them in fourth quarter, whey they had a realistic shot at stealing the game.) It was clear that New York was the much more desperate team, and they managed to extend their season.