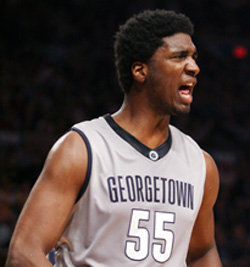 Jeff Green wasn’t the only former Georgetown Hoya to donate a million bucks to the school. Roy Hibbert did the same, it was announced Tuesday.

The money is for the John R. Thompson Jr. Intercollegiate Athletics Center, a building named in honor of the Hall of Fame coach who led the Hoyas for 27 years and won a national title in 1984. From the press release:

“I am deeply indebted to Georgetown University and the basketball program for all they have done for me,” Hibbert said. “I put in a lot of hard work to get where I am, but I was given a tremendous amount of guidance both on and off the floor from Coach Thompson III and I wouldn’t be here without him.”

A groundbreaking ceremony for the Thompson Athletics Center is scheduled for September 12, 2014. Hibbert’s contribution is part of the $62 million project that will be completely supported through philanthropy. […] “From before the likes of Paul Tagliabue through our current roster, Georgetown Basketball players have formed a strong bond to this institution and OUR program,” Head Coach John Thompson III said. “Roy Hibbert is Georgetown.

“This gift is significant but it is only one of the ways that he supports those who are coming behind him at Georgetown. He has consistently shown that he is a man of actions, not merely words. Georgetown has always had a history of our players remaining part of the fabric of our program. The recent donations are a testament to the impact our institution has had on their lives and the understanding of how they can impact future Hoyas.”