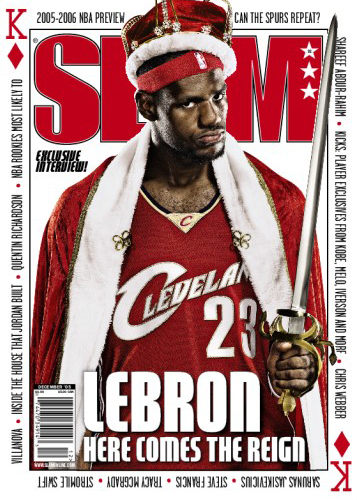 Will he or won’t he? That’s the prevaling question in Cleveland these days. The “he” should probably be capitalized, since we’re using the royal “he” here. We’re talking about LeBron James, and whether or not he’ll return to Cleveland.

We’ve been debating this for months here at the office, and there’s still no consensus. From what I can tell, if he stays he gets to stay near home, make more money from his NBA contract than he can make anywhere else, and gets a chance to build his franchise into a championship team.

If he announces that he’s not going to re-up his contract this summer, he gets to leave and go to a bigger city, make more money in endorsements, perhaps play for a franchise that will do a better job of surrounding him with talent, answer questions every day for the next 12 months about what his future is going to hold, and then get lustily booed every time he returns to his home state.

I don’t think the money is a big deal, considering he’s making $100 million just from Nike, and that seems like more money than you could ever spend in a lifetime or four.
I’m guessing the bigger issue is the Cavs and their management. They brought in Danny Ferry last summer to transform the team, and he tied up a chunk of their cap money in Larry Hughes, who proved himself dispensible during the Playoffs as the Cavs rolled along without him. They still need an athletic point guard, and Big Zzz… doesn’t seem like any kind of long-term option at the five.
While every other team in the Central Division has made plenty of moves this summer, the Cavs have stood motionless. They say it’s because they don’t want to make any moves until they know what’s up with LeBron. I imagine LeBron sitting around at his mansion in Akron, a couple of lions walking around the grounds. Bron tunes into ESPNnews and sees the Bulls signing Big Ben, the Pistons signing Nazr, the Bucks trading for Villanueva, the Pacers trading for Marquis Daniels. And nothing from the Cavs. So he throws the remote into a mountain of Air Force 1s.
By not announcing his intentions, LeBron seems to be saying that something isn’t right.

And until LeBron lets us know what’s up, his silence is speaking volumes.