Rudy Fernandez Gave Nate McMillan a Vision of the Future 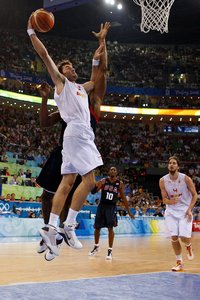 A glorious future, one in which the Portland Trailblazers are a well-oiled machine, defiantly marching through the Western Conference and leaving fallen bodies in their wake.

The Oregonian caught up with the Blazers’ head coach, and he talked about how tough it was to go against Rudy Fernandez – and not cheer for him wildly – in the Gold Medal game of the Olympics:

“I’m sitting there (in the gold medal game) with a straight face, trying not to smile,” McMillan said. ” (Spain) are the guys we have to beat, but I’m caught. That’s my player and I want to (he claps his hands twice) but I gotta (he makes a serious face) because we are going up against him.”


“I was so impressed with him that it was to the point where after the second time I saw him, I didn’t sleep that night because I was moving my rotations around,” McMillan said. “I swear I did not sleep. I could not sleep thinking about him. Because I’m saying, ‘We can put him here, do this with him, do that with him and Brandon (Roy), and do this… So he’s playing for us. Oh yeah. I see that right now.”

What Nate doesn’t mention, is that he accidentally tried to high-five Dwight Howard after Rudy hammered all over him late in the game.

If injuries don’t spoil the party, Portland could end up being truly frightening next season. On paper, they almost have too much talent. A problem, no doubt, that most teams would kill to have to deal with.