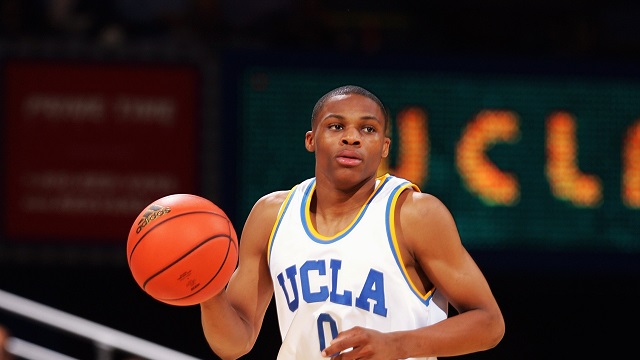 Russell Westbrook has made the largest donation by a former hoops player in UCLA’s history, and the school is celebrating by naming a gym floor in the explosive point guard’s honor.

Join us on Jan. 7 for @russwest44 Night as we celebrate Russell’s commitment to UCLA hoops. https://t.co/uhWwTF96Ui pic.twitter.com/QgQoW1eGLw

The dollar figure Russ gave isn’t known, but the school says it’s a “significant financial contribution” by the NBA All-Star.

Westbrook, 27, will be feted on campus in January.

The UCLA Athletic Department is pleased to announce a significant financial contribution from NBA All-Star Russell Westbrook to its Mo Ostin Basketball Center project – the largest by a former basketball student-athlete in school history. In honor of Russell’s gift, the UCLA Men’s Basketball practice floor inside the program’s new state-of-the-art facility will be known moving forward as Russell Westbrook Court.

UCLA will formally recognize Russell’s generosity and welcome him back to Pauley Pavilion when the Bruins face the Arizona Wildcats on January 7. Russell, along with wife Nina (Earl) Westbrook – a former UCLA women’s basketball student-athlete – and parents Russell and Shannon Westbrook, will be sitting courtside and honored at the Bruins’ Pac-12 Conference home opener. Additionally, to commemorate the evening, all fans in attendance will receive complimentary eyeglass frames, a trademark of Russell’s at post-game NBA press conferences, courtesy of Wescom.

Westbrook, who played in all 75 games during his two-year career at UCLA, helped lead the Bruins to back-to-back Final Four appearances in 2007 and 2008, averaged 12.7 points, 3.9 rebounds and 4.3 assists as a sophomore before being selected by the Seattle Supersonics with the No. 4 overall pick in the 2008 NBA Draft. Named to the 2008 Pac-10 All-Tournament Team following UCLA’s victory over Stanford in the conference championship game, the Leuzinger HS (Lawndale) alum led the Bruins to a 35-4 overall record, regular season Pac-10 title and the school’s first No. 1 seed in the NCAA Tournament since 1995. […] “I loved my time at UCLA and jumped at the opportunity to give back to the University that provided me with amazing opportunities and great memories,” said Westbrook. “I am truly honored to be part of the legacy that is Bruin basketball.”