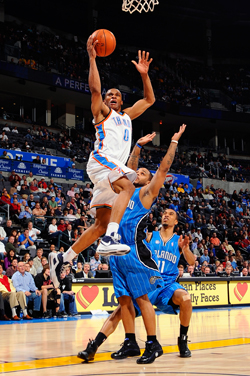 Well, about one-fifth of the NBA regular season has been played. At this point there is already early talk of who will be taking home end of the year honors. Will LeBron finally get that elusive MVP? Will Kobe garner another one? How about the Rookie of the Year award? Is Derrick Rose the top dog in

that category, or will better scoring numbers spell victory for O.J. Mayo? Can Michael Beasley register enough double-doubles to throw his name in the ring?

Certainly this is one of the more heralded rookie classes in the last couple of years, but while the ROY may go to someone like Rose or Mayo, neither has proven to be the most valuable newcomer to their new team. That distinction goes to a member of the worst franchise in the NBA, the Oklahoma City Thunder; that player is Russell Westbrook.

You may find yourself questioning how a point guard posting averages of 12.1 points, 3.2 rebounds and 3.7 assists can be having the most positive impact of any first year player. Heck, Westbrook struggled to finish around the rim and still hasn’t completely developed the ability to be a perimeter shooting threat. Of course, analyzing a player strictly from a basic statistical standpoint hasn’t always proven to be the best means of determining an individual’s value. To do so, there is a need for greater and more detailed analysis.

According to numbers compiled by the brilliant statistical minds at 82games.com, not only is Westbrook having the most impact of any rookie on his team’s production, he ranks fourth in the entire League. Allow me to explain this with a little more detail.

Now, there may be some confusion with these numbers because of the fact that Oklahoma City is the proud owner of exactly one win on the season. Even with Westbrook on the floor, this team is easily overmatched by most other teams, but just not as much when the former UCLA Bruin in running things in the backcourt. When Westbrook is on the floor, his team is outscored by an average of 1.3 points per 100 possessions, with that differential escalating to 27.2 points when he is out of the game.

Defensively, it makes sense that Oklahoma City performs better when Westbrook is prowling the perimeter; even by a number as high as 16 points. As a sophomore in college Westbrook was one of the elite backcourt defenders in the country. He has fantastic lateral quickness, good length and great defensive instincts. His presence is felt most often by his ability to create fast breaks going the other way thanks to intercepted passes or deflections. Not to be overlooked is his 1.6 steals per game which ranks him second amongst all rookies.

Offensively, Westbrook’s presence isn’t as easy to ascertain. For one, he isn’t shooting a particularly high percentage from the field this season. He does a good

job of distributing to teammates, but 3.7 assists per game at 25 minutes of playing time isn’t going to put him near the top of the League. What Westbrook does do well though is play smart basketball. He doesn’t try to go above and beyond what he is capable of with a basketball in his hand. Westbrook’s most dangerous features as a player right now are his quickness and athleticism; it makes perfect sense then that nearly one-third of all of his shots this year have come in transition.

In scenarios where he is relegated to playing in the half court set, Westbrook has shown pretty good shot selection. No, he hasn’t hit his shots on a consistent basis, but by not forcing tough shots, it results in more offensive rebounding opportunities for his teammates. While no missed shot is a good thing, some misses are less detrimental than others if they are taken when one’s team has an advantage inside.

Of course, the most obvious reason why Westbrook’s presence results in more points is the simple fact that he commands more defensive attention than the alternative option: Earl Watson. Let’s face it, Watson is not the same kind of explosive threat that Westbrook is with the basketball in his hands. That extra half step of cushion would be defenders have to grant Westbrook can be the difference between an open look or additional space to create off the dribble.

Westbrook may not be the most talented rookie in the League this year—in fact there is no doubt he isn’t—but his presence helps his team the most. Derrick Rose shows tremendous flashes, but Chicago only scores 0.5 more points per 100 possessions with him on the floor, while his defensive presence is woeful enough to result in a 15-point deficit with him on the court. The same can be said for O.J. Mayo. What he brings in scoring he lacks in defense and results in an eight-point deficit with his presence. In fact the only other rookie who has a significant impact on his team’s total production is Anthony Morrow whose presence is worth 13 more points for the Warriors when he is on the floor.

The Thunder will likely find themselves picking in the Top 5 of next June’s draft again and there are at least a handful of players who will likely end up as better players than Westbrook in the long run. The results that he brings when he steps onto the court though are worth thinking about, not only for who should be starting at point guard in Oklahoma City, but when discussing which rookie has made the biggest impact thus far in this young NBA season.