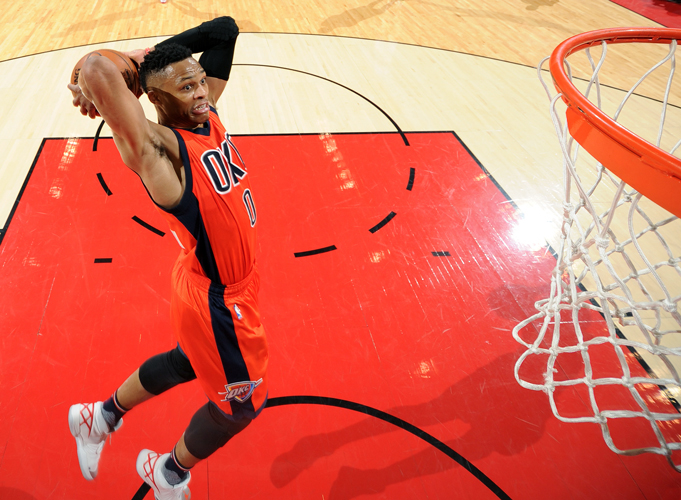 Dwyane Wade scored 30 points and dished out 9 assists to lead the Miami Heat to their second win in a row. Hassan Whiteside added 27 off the bench to take care of business against the Brooklyn Nets in South Beach.

The highlights weren’t stopping for the OKC Thunder on Monday night when they traveled up North to take on the Toronto Raptors. Russell Westbrook finished with his 16th triple-double of the season (26 points, 11 boards, 12 assists), and Kevin Durant led all scorers with 34 points, 8 assists and 8 boards of his own.

#ATLshawty (sup, Lang?). Jeff Teague led the Atlanta Hawks to victory against the Chicago Bulls in the Windy City, finishing with a game-high 26 points to go with his 6 rebounds and 7 assists.

LaMarcus Aldridge finished with 31 points and 13 boards as the Spurs blew out the Memphis Grizzlies on the road. Patty Mills added in 17 points off the bench, as San Antonio shot over 50 percent in the contest.

The rook from Jersey finished with 27 points, 10 rebounds and 5 assists to help his Timberwolves earn their third victory in four games. Andrew Wiggins led the way with 32 points.

Jrue Holiday returned to the court on Monday, after having been out due to injury. He scored the game-high 22 points to lead his Pelicans to victory. The Knicks’ Carmelo Anthony also finished with 22, this time in a loss. However, Melo did get somewhat of a win when a little kid ran onto the court to give him a hug.

JJ Barea dropped an 18-point, 11-board double-double to lift the Dallas Mavericks over the Denver Nuggets on Monday. Dwight Powell added in 16 points in the win.

The Utah Jazz cruised to victory when the Los Angeles Lakers came to visit. They led ’em by as many as 53 points, and handed Kobe Bryant his worst loss ever. The Jazz shot over 50 percent from the field, and kept the Lakers right at 30 percent. Rodney Hood got ‘er done for the Jazz, tallying 30 points on 11-13 shooting.

Allen Crabbe finished with 21 points when his team played host to the Sacramento Kings on Monday night. The Blazers got the victory, leading by as many as 28 points during the game.

With double-doubles coming from both DeAndre Jordan (15 points, 13 rebounds) and Chris Paul (13 points, 14 assists), the Los Angeles Clippers had this game in the bag—making the win their third straight victory.