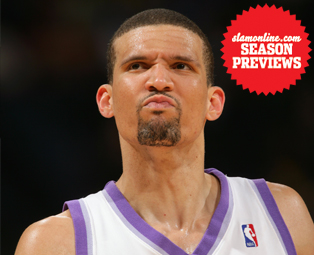 We conclude previewing the Pacific Division with the Sacramento Kings. You can read past previews here.

The Kings are in the enviable position of having nowhere to go but up, seeing as they finished at the bottom of their division the past two seasons and haven’t made the playoffs since 2006. Unfortunately, not only are they in one of the League’s most competitive divisions, they’re in the

West, and the West is the best.

However, management made some momentous moves late last season extending into the off-season that could have them looking like the fluid unit of yesteryear.

Some of the biggest changes have come in the frontcourt with the trade of Ron Artest to the Rockets and the acquisition of big man Jason Thompson, who at 6-11, 250-pounds is poised to make an immediate impact at power forward/center due to his excellent length and rebounding skills. His big body and high basketball IQ will be a welcome addition to a big but relatively soft frontcourt. The other major development was the breakout season of Francisco Garcia which led to a multiyear contract extension for the third-year small forward out of Louisville.

Less significant but still important is the acquisition of Donte Green in the trade for Artest to add more depth to an already experienced backcourt. Now, to break it down depth-wise:

As much as people b*tch and moan about Brad Miller, he’s still the most consistent producer up front. Not for nothing, 13 and 10 is significant no matter how you slice it. His detractors say he’s old, among other things, but he’s only 32 and has more experience than anyone else, particularly in the postseason. He was an integral part of the teams from the “glory days.” His experience will no doubt be a factor in how effectively players like Hawes and Thompson develop this season.

Spencer Hawes had a decent season considering many (including me) wrote him off at the beginning of the year when he went down in the preseason with a serious knee injury. He only missed a dozen games, which is a testament to his determination and toughness. His numbers weren’t anything special, but he showed signs of why the Kings went after him like they did. He’s quick on the uptake and as his minutes continue to increase so too should his numbers.

Jason Thompson, like Hawes, was this year’s big man that no one really talked about, and thus the steal of the draft. He had a big year at Rider putting up double-digit numbers in points and rebounds. Credit Reggie Theus and Geoff Petrie with seeing the huge potential of Thompson. He’s one of the few big men who come into the league looking to tussle inside which is sort of an anomaly in the west these days.

If the Kings are to be effective on both sides of the ball in the frontcourt this season a lot could hinge on how quick Hawes and Thompson are on the uptake when it comes to their development.

Somewhere in the above list should be Jason Thompson’s name as well. He’s more of a legitimate PF/C than Mikki Moore –  Moore proved he’s more effective in an up-tempo perimeter offense. Moore was a good addition because of intangibles like his hustle. His intensity made him a favorite with fans who undoubtedly appreciated his efforts throughout the season but he his lack of bulk and inconsistent perimeter shooting still leaves a lot to desired. He’s not a consistent presence inside when it comes to scoring. Kenny Thompson and Shelden Williams both had ineffective seasons and are too small to be more effective than Moore.

The Kings are strongest at this position, but they’re still outmatched by most of their opponents. John Salmons played in all but one game and also had a breakout season. Whether it was enough to justify why the Kings gave him so much money is another matter, but it’s obvious Theus’s system works more to his advantage than anywhere else he’s played so far.

The same could be said about Garcia who also had a breakout season as he flourished under Theus’s offensive system. This says a lot considering the Kings’ style of play devolved from a fluid style of play into one-on-one. But if fluidity is Theus’s aim this year, Salmons and Garcia could contribute even more, particularly Garcia, who is a solid spot-up shooter.

On the other side of the equation is an even more experienced and formidable backcourt (which has been the hallmark of the franchise in the past) that has undergone a dramatic change with the Mike Bibby trade late last season.

Beno Udrih was another King having a banner season before he was sidelined with an injury late in the season right around the time things got really exciting and the Kings were trying to make a run at the postseason. The Yugoslavian Slovenian was a great acquisition for the Kings because of all the experience he accumulated with the Spurs. In his initial season with the Spurs, he demonstrated that he is capable of running an offense. Healthy again, he’ll have to step-up even more if the offense is to re-evolve into the well-oiled machine. He contributed enough in the scoring column, but his passing was nothing to write home about. But he makes good decisions and isn’t reckless with the pill.

Bobby Jackson is back to where he started in a way since Sacramento is where he made a name for himself as a sharpshooter. His biggest and brightest years came during the Kings’ disappointing runs at the title. If the Kings are looking to ratchet-up the excitement level at Arco then Jackson’s the man. He can be a ball hog at times and take ridiculous shots but his reputation as a solid backup off the bench is well-known even if it’s been maligned. Injuries have plagued him of late and his last season with Houston was disappointing. Hopefully all the instability of late hasn’t hurt him.

Could Sacramento be the journeyman’s last stop or merely his latest?

Kevin Martin is undoubtedly the best thing that happened to the Kings of late. His explosion in 2006 carried the team into the playoffs that year, their last postseason appearance. Martin’s role has kept expanding and it’ll undoubtedly expand even more. As slight as he is at 6-7, 185 pounds, he’s proven unstoppable for opponents. He is the key to the team’s success as the undisputed leader and go-to guy. Rumors of his rigorous off-season regimen are starting to spread and a lot of his opponents have stopped underestimating, but it’s clearly too late. This dude is insanely talented but so is everybody else in the League. The fact that he works at taking that talent to another level is what is truly inspiring. Now he’s the top dog. If he has another killer season, so will the Kings.

Quincy Douby has to be a major disappointment to Kings’ fans. The former first round pick failed to make a significant contribution and has struggled to make it into the rotation since coming on board in 2006. The Brooklyn native will always find favor with people like me but to fans his worth must be well…Douby-ous. He needs to step-up in a major way if Kevin Martin is to get any relief from the abuse he takes. The wear and tear has started to highlight the fact that Martin is actually human so Douby needs to step-up to justify his place on the roster this season.

The Kings are in a great position as underdogs this season. They’re relatively healthy and made some strong additions on top of the great addition they made in Hawes last season. Their success may depend on how well newcomers like Jason Thompson acclimate themselves to the Kings’ re-evolving system. The frontcourt could be the key to taking a lot of the pressure off the backcourt, particularly the scoring burden as it relates to Martin. They definitely won’t finish last with the Clippers still in a tailspin but they’ve got an uphill battle making it into postseason play this year due to the competitive level of the division and conference. But never say never. They didn’t last year and look how far it got them – closer to the playoffs, which was closer than they got the year before last.