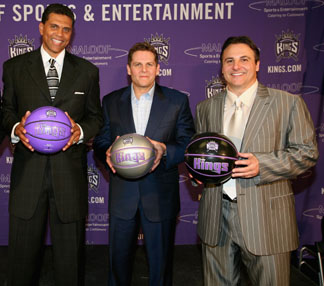 In the span of a week the situation in Sacramento has gone from bad to worse. In fact, if it wasn’t for bad the Kings wouldn’t have any luck at all. They capped a sub par season by finishing last in the Pacific (probably the toughest division in the League) and failed to qualify for postseason play for the first time in six years. Looking back over that span of time, the pattern of decline becomes more evident. Six years ago the franchise posted 61 wins and were a force to be reckoned with, but with each successive season, like an aging veteran they seemed to have lost a step and have trouble keeping up with the competition due to their lackluster defense. Last year was the first time in recent history the team was consistently outscored by their opponents. Granted it was a small margin of a couple of points but it was still significant enough for management to finally be in a position to do something about it, but they weren’t really the sort of moves that’ll restore confidence in cow town.

Relocating the team isn’t gonna do it. Neither is firing the head coach and replacing him with an even less experienced one. Drafting a seven-foot, nineteen-year-old prep-school phenom with a history of knee problems is the sort of ish that’ll get you run out of town.

Initially Spencer Hawes must’ve looked like a dream come true to King’s fans. The seven-foot freshman out of Washington was regarded as one of the best centers in this year’s draft because of his athleticism and potential. He led Washington with 15 points (53 percent from the floor) and 6 rebounds while dealing with an injured knee and ankle not to mention a midseason illness in his only year of college. This kid is the real deal, a Nowitzki in the rough, willing and able to mix it up inside. Management has high hopes for him as a backup and eventual replacement for an aging Brad Miller but all of that’s up in the air since he came down with Odenitis last week and had to sit out the start of training camp and is questionable for the season.

To add insult injury, Shareef Abdur-Rahim will also miss the start of the season after undergoing arthroscopic surgery to repair a knee that was damaged by the same affliction, weakening an already debilitated frontcourt. At 31, Brad Miller is still tough. His numbers have diminished but his presence is still significant. He possesses a decent mid-range shot if left open but unfortunately he’s never been that good with his back to the basket. The Kings really don’t have anyone in the frontcourt that can be a force like that outside of Ron Artest. At small forward, Artest is more adept at out-muscling his opponents or beating them off the dribble. As the team’s second leading scorer, Artest will start the season on the bench serving out an seven-game suspension for a domestic dispute case he caught off court late last season but expect a new look from him as he’s slimmed down some and been working to refine his jumper with the help of assistant coach Chuck Person, a prolific long-range shooter himself in his playing days.

Artest is also a great defender, he averaged a couple of steals a game and like Miller possess great awareness in that area. The two of them will undoubtedly anchor the team down low. If Abdur-Rahim, or Hawes for that matter returns, they could shore up some of the gaps defensively that led to their demise last season. Mikki Moore is another bonus. The Kings picked the seven-footer up from New Jersey in July following a breakout season. At 6-10, Justin Williams is another formidable presence inside who could potentially pickup the defensive slack. He had an okay year but it wasn’t anything to really write home about. Kenny Thomas could possibly have a breakout year at power forward now that he undoubtedly have more playing time. He struggled with his shot last year, and he does have a decent shot, but maybe he can find his stroke this year now that Musselman is out and Person is in. With Artest out, Francisco Garcia will most likely start the season at small forward and get a chance to finally shine.

With Mike Bibby and Kevin Martin at the one and two, the King’s backcourt is the only area where they have a decided advantage over most opponents but like their frontcourt they’re relatively inexperienced and not that deep. Still it’s where most of their scoring is generated. At 28, Bibby is by far the most experienced vet on the squad, notwithstanding Miller who also has considerable playoff experience. Regardless of his age, Bibby is still a holy terror from downtown and explosive off the ball as evidenced by his late season torching of Steve Nash and the entire Sun’s defense. What more can be said about Martin that already hasn’t already been mentioned in this month’s piece in the magazine? He’s the future of the franchise and a perfect complement to Bibby’s stewardship. Orien Green and fellow Arizonian Mustapha Shakur definitely have some big shoes to fill as backups. The only question is whether or not they’re up to the task. The same goes for John Salmons and Quincy Douby behind Martin who will play an even greater role than he did last season. Bibby and Martin have an even greater task of reinforcing the team’s defensive front line which is a particularly tall order when considering the high-caliber guards that drive the high-octane squads populating the Western Conference this year.

To what extent Bibby, Martin and the rest of the team embrace Reggie Theus’s defensive mantra is the big question. Saying and doing are two wholly different matters altogether. It’s ironic that defense is the name of the game for Theus who has no experience as a big-league coach and who is probably best-known as a long-distance gunner for the Chicago Bulls back in the day. That old saying about an old dog’s inability to learn new tricks comes to mind and for an offense-oriented learning to play effective defense is gonna be a hard trick. Which is why if I were a betting man, I’d put my money on the Kings once again missing the playoffs because their defense isn’t the only problem in the equation. Like the Dallas Mavericks they might’ve had their best opportunity to make any headway into the postseason when they had the best personnel to do it. They’re in a rebuilding stage at this point and they don’t even know what city they’re going to be playing the next few years. Even if they get out of dodge, a new fan base wouldn’t be enough to propel them any farther than they’ve gone since the turn of the millennium. As it is they’re too many unanswerable question about their future as it is. Until the team takes Theus’s advice about trusting one another to heart there ain’t no future to their fronting.