The Pursuit of Happyness 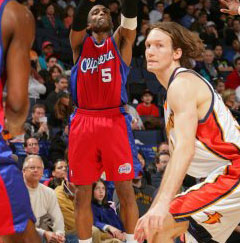 Here, check this out, specifically the link marked “Alumni Gardens,” second or third one on the left…

That’s the real-time view from my new office. Literally — there’s actually a little CCTV camera mounted on the window across from my desk, like five feet from where I sit. It’s kinda cool, if a little weird. Mostly though, it’s a 181 degree difference (you know, not quite polar…) from the view out the window of the SLAM Dome. Which, being in midtown Manhattan, was mostly a view of other buildings, and so not really a view at all.

I believe the word you’re looking for is “quaint.” There’s a reason they call this place Happy Valley.

Anyway, that’s as good an example as any of how much life has changed since I left my Ed. duties behind. The transition has been eased by my continued involvement in the mag, but I can’t pretend it’s the same, especially when it comes to having my finger on the pulse of this basketball thing. Here, for example, are some of the differences.

New Job: Haven’t seen an NBA game start-to-finish in about a month, and am usually in bed before the second half of the TNT double-header even tips off.

As I say, it’s different.

What’s crazy is how quickly my perspective has changed — I’ve paid more attention to college hoops in the past two weeks than I had in the past two years, a fact helped by my attendance at the Indiana-Penn State game last weekend. For those lucky enough to have missed this ESPN Regional gem, my Nittany Lions led for the first 30 minutes before being gutted in the last 10. This Roderick Wilmont kid (can I get a Separated at Birth with Little Chris from Boyz N The Hood, only without the pacifier?) took approximately 874 threes and DJ White had — I’m guessing here — 4,692 offensive rebounds. It didn’t help that this game was played the day before students started coming back from winter break, so the atmosphere at the misleadingly named Jordan Center (named after this guy, sadly, and not this one) was pretty much non-existent. Of course, given that Penn State’s home gym was designed more as an events center for performances by people like this than it was for hoops, there’s not much atmosphere in general.

And yeah, Trace Adkins… these are the times I think my move may have been a mistake. F*ck. But then I remember that most of the new hip-hop pretty much sucks too, so there’s a part of me that really doesn’t miss being in the combined SLAM/KING/XXL offices and hearing the new ish two month before it comes out, ’cause the new ish is generally pretty annoying. Not that I haven’t found some decent hip-hop in State College, sort of: When I checked out the shared iTunes folders on our server, I was pleasantly surprised to find that at least one of my new coworkers (what up Patrick) had a nice array of beats stashed among his emo and indie rock joints. So there’s that.

Anyway, being at an IU-PSU game brought my mind back to the Greatest Game I’ve Ever Seen In Person (TM). I was a sophomore, Bob Knight was still the King of Hoosier Nation, and Indiana was No. 1 in the nation. Penn State was in its first season of Big Ten play and looking overwhelmed by the challenge. And then this happened. I’ll relay my memories of this one in detail some other time, but for now it has me inspired on some reader-participation ish. And so I wonder, dear readers, what’s the best game you’ve attended? And by “best” I don’t really mean your team won; maybe I should say “most memorable,” because even though my team lost, this sh*t is burned into my brain for all eternity. So, pro, college, high school, biddy league, whatever, I’m curious. Post them below…

But back to the current season. Last night Penn State played at Michigan and got its ass kicked, a loss I stupidly watched on TV. Michigan’s apparently one of the worst 3-point shooting teams in the country, so of course they shot 57 percent from outside last night. So, good for them. Anyway, I’d just like to take this opportunity to say I hate Michigan. I hate that shade of yellow they like to call “maize” ’cause they think it sounds sophisticated but really looks like your piss when you’re really, really dehydrated, and I hate that this current bunch of scrubs they’ve got has the nerve to wear the numbers of the entire Fab Five. Dion Harris, you are no Jalen Rose. Deshawn Sims, you are no Chris Webber. Zack Gibson, you sure as f*cking hell are no Juwan Howard. Ron Coleman, you are most likely no Jimmy King. And Kendric Price, I don’t know for sure, but I’m guessing you’re no Ray Jackson. As much as I hate Michigan as an entity, I love basketball, and therefore I love the Fab Five, and these clowns rocking those numbers is a travesty.

And now, because I’m too lazy at the moment to come up with a good transition, here’s four things I love right now.

I love Mike Dunleavy Jr. Do you know why I love Mike Dunleavy Jr? Because he gives idiot sports writers who can normally only think to compare up-and-coming white guys to Larry Bird a chance to compare those up-and-coming white guys to somebody else. Somebody, specifically, who’s not a top-10 all-time player; hence, even if these comparisons are in no way accurate, they’re at least LESS INACCURATE. In this way, Mike Dunleavy Jr makes stupid people a little less stupid, thus making the world a better place.

I love David Beckham. Do you know why I love David Beckham? Because even though every soccer expert on the planet agrees that he’s a good but not great player on the downside of his career, and therefore not really worth all the attention being paid to him by other soccer experts, all these same soccer experts — every last one of them — has spent the past week writing and talking about almost nothing but David Beckham. In reality, David Beckham is a decent but limited player who’s really good at a couple of things, and who by all accounts works really hard in practice and is a good teammate. In other words, David Beckham is essentially this guy, only with an anorexic shopaholic no-talent wife and mind-blowing international fame and endorsement deals worth something like half a billion dollars. Which, when you think about it, is pretty awesome.

I love Nas, ’cause the new joint is really, really solid. Hip-hop may in fact be breathing after all.