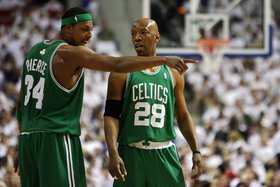 When Cassell does get in the game, he’s not only playing terribly, but he’s also getting yelled at by Paul Pierce for not properly running the plays. Frustration has been building up for the emotional and talkative Cassell, and it was only a matter of time before it spilled over.

Following the C’s first Playoff road win, Sam I Am admitted to the Boston press corps that he’s unhappy with his lack of playing time.

“This is my first year (in the NBA) that I sat out in a playoff game,” Cassell said. “I didn’t get any playing time in four games. That’s my first time ever. It boggles not just me but anyone around, like, ‘Why’s he not playing?’ I’m not discouraged, but it’s tough, ain’t no lie. It was tough because I know I can play.”

Sam, for the love of Larry Bird, you’re averaging 4 points per game this postseason. Most troubling, you’re not even dishing out 2 assists when given the chance to play. And did I mention that you turn 40 soon? Just be thankful that someone is allowing you to wear a pro basketball uniform.