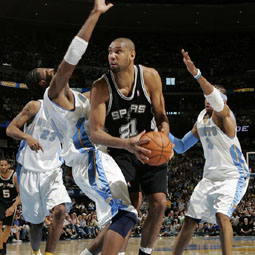 In my brief time as a sports journalist, I have covered both teams in the Denver v. San Antonio series to varying degrees.  Most of y’all know that I am based (and raised) out of the Denver area and therefore have had a lot of my NBA attention turned towards the hometown Nuggets.  The Spurs on the other hand, have been another team I have seen in person often, but have also been able to cover on multiple occasions for the magazine.  I was in San Antonio for Games 1 and 2 of the ’05 Finals put together a piece on their TEAM’s success for iss #100, and just recently put together an Old School joint on a former Spur (soon to be out in #109.)

“The Spurs have barely strayed from the proven blueprint since DRob’s retirement, relying on a deep cast of role players and ex-stars to support the three-headed attack of Duncan, Ginobili, and Parker.”

These words were how I described the 3 ‘chips out of 10 that have landed in the River City in recent years.  While nothing has changed in the year since these words were printed in #100, I have felt a need to better and more creatively ascertain why the Spurs are so damn effective.  Saturday night, the Spurs were at it again, taking back home court advantage from the Nuggets in a 96-91 Game-3 victory in Denver.  It became clear that the Spurs tend to win games in similar fashion.  They keep the game close and wait for their moment.  It’s not pretty and you might not even realize what is happening, but then they are up ten with just a few ticks remaining and the game is basically over.  They are a boa constrictor, slowly choking the life from their victims, making no friends along the way (are there any Spurs fans that don’t live in San Antonio?)

Game 3 was close from the tip, with the Nuggets playing a strong, aggressive 1st quarter (don’t fight, it’ll just make it that worse) before both teams settled in a back-and-forth battle.  With just two minutes left in the third quarter and the score knotted at 64, the Spurs went on a quick 8-0 run over a 40-second span to take a lead they would never relinquish.  In predictable fashion, the Spurs were led by their big 3 (Parker, Duncan Ginobili) scoring 21, 20, and 19, respectively.  Meanwhile, the Nuggets struggled to establish an inside game in the second half, but were paced by the league’s second leading scorer, Carmelo Anthony, who finished with 28 points and 12 rebounds.

The Spurs, now proud owners of a 2-1 series advantage, were able to again hold on in the fourth quarter keeping the Nuggets at bay, as the home team made run after run.  The Silver and Black relied heavily on the long-ball, hitting many well-defended, shot-clock dwindling 3’s.  On the night, the Spurs hit nine treys, including five from Michael Finley and 2 big bombs from Bob Horry.  Yes, it is the year 2007, and yes, Robert Horry is still hitting late-game buckets.  Game 4 comes at you tonight, occupying the late 10:30 EST slot.  Oh yeah, I was there Saturday night, here are few observations from behind the scenes and on-the-court.

Nuggets guard Steve Blake not only gave his team a workman-like 36 minutes of playing time (7 points/7 assists) but spent the 90 minutes leading up to the game working hard on his game.  While many of his contemporaries don’t warm-up at breakneck speed, the Terp was bustin’ his ass pre-game going full-speed from half-court against assistant coach Jahmal Mosley.

Commissioner David Stern was in the house to present Nuggets’ center Marcus Camby with his Defensive Player of the Year award.  The Commish held court in the pressroom at halftime and spoke at length about various topics, including the Joey Crawford issue, the bizarre technical called on George Karl earlier in the game, the suspensions of Melo and JR Smith, and the ASG/NBA teams in LV.

Nuggets locker room was silent, then suddenly packed.  Allen Iverson was in a jovial mood, with light-hearted jabs for many of his teammates.  Second-year forward Linas Kleiza was his main target, after LK called out to one of the ballboys, “Hey yo’, my man!” AI couldn’t help but poke fun at the Lithuanian accent.
“HEY YO, MY MAN!” mockingly came out of Iverson’s mouth maybe a dozen times.
While LK giggled, AI came back with this gem, “Tryin’ to be a cool muthaf&%#@a!”

This exchange was all going down just 50 minutes before tip and Iverson was the only non-uniformed Nug, as he was just getting changed.  From across the room, a sweaty, warmed-up Melo entered and immediately got involved, “YO, you just got here?!  What type of leader are you!?” which had most of the fellas in stitches, a bit of humor and light-heartedness which have been a rare sight in these parts over the past few years. Chemistry, I think is what you call that.

LK then surprisingly asked me if I could put him on the cover of GQ, as he thought I was with the suddenly NBA-interested outlet.  (Must be the brown, old-school Vans I was rockin’ that screamed, GQ.)  When I told him I was with SLAM, he replied, “ahhh, I don’t f&@%k with SLAM.”  He later asked again about SLAM, and said he just guessed I was with GQ.  Maybe someone who worked on the recent AI piece in GQ was a floppy-haired, bespectacled, 6’8” dude in skater shoes.  I will have to let LK know that it behooves him to start, well, “f*[email protected]&king” with SLAM.  The Nuggets could also use some productivity from the playoff rookie, but Karl hasn’t felt quite comfortable giving him extended minutes in the series.

Iverson also graced us with a few bars from a recent Rich Boy cut, “.. so iced out like a snowflake.”  Oddly enough, AI hadn’t just walked in from another spring snow storm.  Highs on Saturday were in the low 80s.

As I left the Nuggets’ locker room I bumped into  Scoop Jackson, complete with `two cameramen.  We said a quick “what’s up” then caught up a few minutes later outside the pressroom.  Seems our esteemed former editor was putting the finishing touches on a documentary he has been working on for the past three years.  Y’all will surely hear more about this in the near future, so I won’t spoil things.  GAME ON!

Marcus Camby received his DPOY award and not ten minutes later began jacking up shots.  Camby put up five of the team’s first seven shots and ultimately played one of his worst games of the season, never seeming a major part of the action.

Melo came out playing great, scoring 11 of the Nugget’s final 13 points of the quarter.

The refs called a very curious game tonight.  Not bad, and not for one side or the other, just curious.  I believe there were in upwards of eight offensive and/or defensive 3-second calls in this quarter alone.  This was all out done when with just under a minute left in the quarter, Nuggets’ Head Coach George Karl was mysteriously called for a “coach’s box” infraction technical.  Not only was the coach maybe only a foot outside the box, but he wasn’t even getting at the refs at the time, merely coaching.  Karl later admitted that it was probably the first time he had even seen one of those calls, aside from his wacky CBA days.  The technical came with the Nuggets holding an 8-point lead, which quickly shrunk to three by the end of the quarter just seconds later.

Other than the weird whistles, it was a great quarter of basketball.

Like death and taxes, loud booing for Manu Ginoboli.

The Nuggets finally got some production from their bench with JR Smith and Eduardo Najera doing their collective “things.”  Najera put together a “Rodman-like” 10 board (4 offensive) and no points.  JR was explosive on the offensive end, but was later the culprit in the dubious late 3rd-quarter Spur run.

Nene is straight out balling.  If he is able to stay healthy next year, he may be on his way to a possible ASG mention.  Unfortunately for Nuggets’ fans, Mabyner didn’t get enough touches in this game.  During the second half, the Nuggets half-court offense was largely based on jump shots from the perimeter.  Nene finished with 18 and 7, but he still should have had the ball much more, especially considering that Duncan admitted that the Brazilian was playing him so hard on both ends of the court.

While both teams struggle a bit from the floor during the second, the Nuggets were brutal, squeezing out just four baskets from the field.  The home team wasn’t faring any better from the charity strip either where they finished just 22-30 on the night.

Iverson introduced himself to the game in the first few minutes of the second half, hitting his first four shots.  The Answer scored more (8) in the third’s first five minutes than the entire first half (7).

Melo and Bruce Bowen might be playing the most aggressive and physical basketball anywhere right now.
Those two are mugging each other.

That 40-second stretch with 2 minutes left in the quarter went like this: Score tied at 64, when Manu started by drawing a foul and hitting both free-throws.  The veteran Horry stole a lazy in-bounds pass by JR, and then promptly nailed a three from the corner. A JR Smith steal and missed lay-up led to a deep Finley three and an 8-point difference.  Even after Smith made another steal and this time converted the fast break with a foul, Horry produced arena-wide groans when he nailed another three as the quarter ended, bumping the lead back to 8.

This quarter is easily summarized as one where the Nuggets were never able to “get over the hump.”  Whenever Denver made a move and got to within 4 or 5, one of the Spurs hit a perimeter shot with the shot-clock winding down.

Not only did Iverson assure the masses that his team, “hasn’t lost any confidence,” but he also commented that “everyone in that locker room knows we can still win this series, and that’s the most important thing.”

Spurs Head Coach Gregg Popovich again used the expression, “we held on” in description of the win.  He also gave his big man a lot of credit for the teams’ success from the outside.  “Timmy just attracts a lot of attention, which leads to a lot of 3’s.”

Nuggets Coach Karl looked considerably worse off than his counterpart, looking haggard and exhausted.  Despite basically calling Game 3 a “must win” earlier in the day the coach was still happy with his team.  “I can’t question my guys’ heart or effort.  They probably just outsmarted and out-tricked us a bit.”  Karl later expanded on the “out-tricking” as the Spurs’ general use of Horry.
“Whenever they play Horry, they’re trying to trick you.”

Both teams were quick to deflate any comparisons to the series of two years ago (despite the first three games finishing in similar fashion.)  Players and coaches alike asserted that the current Nuggets are nothing like the ’04-’05 version.

Can the Spurs go up 3-1 tonight?
Can the Nuggets knot the series up at 2?

I’ll be back tomorrow with more analysis on this exciting series!  Game 4 tonight!