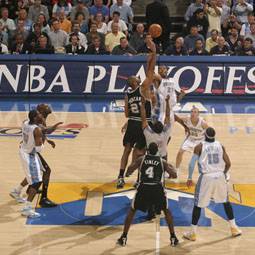 On Saturday night during Game 3 of the Denver v. San Antonio series, the Nuggets trailed in the 4th quarter by double digits, and despite making multiple runs, were never able to “get over the hump.” Last night in Game 4, the Nuggets, who led for most of the evening, not only chaperoned the Spurs to “the hump” but made sure their opponents made it safely over the other side. The visitors escaped the Mile High City with a 96-89 win, stretching their series advantage to 3-1.

The Spurs’ role players, again, did some of the most serious damage highlighted by Robert Horry knocking down a three with just 30 seconds remaining to put to the Spurs up for good. In a similar fashion to Game 3, the Spurs seized control of the game during a stretch with Tony Parker and Tim Duncan resting on the bench. The Nuggets played their best basketball of the series racing out to an 8-point lead at half, thanks in large part to a behemoth 34 first-half points in the paint. The Nuggets’ dynamic duo of Carmelo Anthony and Allen Iverson played great, but the first half also saw Marcus Camby wake up and put up better numbers in the game’s first 24 minutes than he had in the entirety of Game 3.

The Nuggets were in possession of a six-point lead going into the game’s final 12 minutes but two quick threes by Spurs’ guards Bruce Bowen and Manu Ginobili evened the game. As the quarter began to melt away, however, it became extremely apparent which of the two sides was the more seasoned. Although, they played much of the quarter at their desired pace, the Nuggets spent the game’s final 5 minutes settling for one jump shot after another. Meanwhile, the Spurs were the beneficiaries of patience and a mental toughness which produced lay-ups and wide-open looks from the perimeter. With just over three minutes left and the game knotted at 85, I scribbled down this sentence:

‘The Spurs look like they’ve been here before. Not so sure about these Nuggets.’

My feeling was verified minutes later when Duncan split Camby and Nene to put the Spurs up 90-87 with about a minute left. A missed Denver shot led to another Spur possession, but Nene stepped in front of a cross-court pass and found Steve Blake open at the three-point line. The shot was good, but Blake’s right foot was just on the stripe. The Pepsi Center crowd, expecting a tied game, was stunned to learn their team was still down one with 35 ticks left. Enter Big Shot Rob. With a sagged-in defense, Parker drove the right side of the lane. Camby helped, then recovered out to Horry who launched a high-arcing, rainbow–not unlike the hundreds of other springtime bombs he has hoisted in his illustrious playoff career–that hit nothing but net. Spurs up four. Game and series, suddenly on ice. To make matters worse, the Nuggets settled for bad jump shots from JR Smith and Blake on their last two possessions.

After Melo was saddled with his 4th offensive foul with 1:15 left in the third quarter and the Nuggets leading by nine, the Spurs outscored the Nuggets 34-16.

On the Nuggets’ end of things, the same issue glared its head in this game. For the entire series, the Spurs have been unable to slow the inside play of the Nene. But again the team fails to go to the 5th-year forward in crunch time, instead opting for shots from the perimeter. Last night, he again scored 18, but only had nine shot attempts from the field. In the past two games, Nene has gone 14-20 from the field, not to mention hitting 8 of 9 from the line. This guy has the skill to make those numbers from one game.

While I think the Nuggets can take Game 5 in San Antonio tomorrow, as I see them as a much more professional group than in year’s past, I feel the series might be out of reach. The Nuggets surely are a team on the rise, but they are blatantly not ready to contend now in the wickedly competitive Western Conference.