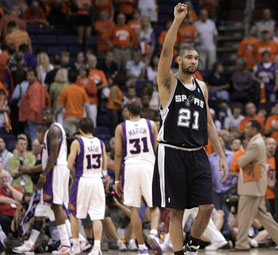 Yesterday marked the beginning of the second round of the Western Conference playoffs.  Due to the voodoo being concocted up in the East Bay, the Spurs v. Suns series is the only match-up that most of us “experts” saw coming. I’ll be honest; I was with the Suns from the get this year. I thought going into the postseason, they were still the team to beat, regardless of what the Mavericks accomplished this year (as if Phoenix’s multiple double-digit winning streaks weren’t impressive.)  However, after closely watching the San Antonio/Denver series my feelings started to shift. Make no mistake, the Nuggets played five strong games in that series, coming up empty in all but the first one.  The Spurs impressed me.  They impressed me big time. While I won’t remove myself from my initial allegiance to the Purple and Orange, I think this series might be ultimately deemed “epic,” by its conclusion.

The two teams did nothing yesterday to hinder that probability, as the road Spurs outlasted (wow, they never seem to win that way) the Suns to take Game 1, 111-106.  Much like Russ, I didn’t take notes (not right away at least) instead choosing to watch the first half with no notebook in my lap.

The game’s first 24 minutes were a fun up-and-down battle with the Spurs seemingly more than happy to get caught up in the Suns’ up-tempo brand of hoop.  If you have read my work here before you know that I am more than fond of a couple players in this series, namely the two fastest guys on the court, the Spurs’ Tony Parker and the Suns’ Leandro Barbosa.  Each played brilliant first-halves as the Suns clung to a precipitous (especially considering the opponent) 2-point lead at half.  What transpired in the last two quarters was chronicled in the usual notes fashion.  Well, actually most of my thoughts are exclusively on the fourth.

The Spurs jump out quickly, to take an 8-point lead just four minutes into the quarter.

Parker hits another jumper at the 6:40 mark which gives the Frenchmen 25 points for the game.  For real, though, if this cat can consistently hit the 16-20-foot jumper (which he never really did against Denver,) he is basically unguardable; maybe more so than any other player in the league.

The quarter starts as usual, with Nash and the Spurs’ Tim Duncan on the bench and the Spurs owners of a “comfortable” 2-point edge.

I just used the term, “comfortable” because the Spurs just want to be close going into the game’s final minutes.

I scribble down for the fourth time this half, “This game is too close for the Suns.”

After the Suns get an offensive rebound and hit a 3-pointer, our EIC’s child/adult-hood hero, Mark Jackson utters, “Extra possessions in the postseason will kill you!”  Yeah, just ask TMAC, JVG, and the boys down in H-Town.

Every team and I mean EVERY team needs a (mid-level exemption) Michael Finley.  It’s kinda nice to have someone who can knock down WIDE-OPEN, BUCK-NAKED jumpers.

When the Nash/Parker collision first takes place, I somewhat mutter, “that wasn’t a foul,” which had been called on Nash.  After they returned from the commercial (and my wife returned to the room) they showed Nash’s suddenly-infamous bloody nose.  My wife and I spent the remainder of the game saying things like:
“He can’t go in like that!”
“Why are they still trying that stupid little band-aid!”
“There’s more blood on the jersey!”  (By the way, Russ, I tried to count, and I think he used a half-dozen of those #13’s.)

With about three minutes left, a particular move by Duncan draws a suspicious foul call on Amare, my wife and I had this exchange.

With just over two left, I begin to get ill with all of the shots of Nash’s now blood-stained mug. At this point, I would even be fine with ABC shoving promos of Desperate Housewives down my throat complete with images of the soon-to-be Mrs. Tony Parker. I normally hate this practice, by the way.

WHERE ARE ALL OF THE FIGHT DOCTORS WITH THAT GOOP AND THOSE LITTLE IRONS TO STOP THE BLEEDING!?!?!?  Probably still in Vegas working that mediocre fight from the night before.  Boxing.  zzzzzzzZZZZZZZZZZ. Wake me when that “sport” is gone.  Sorry, but if it doesn’t involve Hagler, Hearns, Sugar Ray, or Iron Mike, I’m not interested. I mean Hagler v. Hearns!!?!?!?

The blood subsides for a few, just long enough for Nash to re-enter and hit an AND-1 driving lay-up to keep the Spurs lead at two with just over a minute remaining.

Parker drives hard to the hole and is charged with … well, a charge.  Robert Horry, who of course gets his requisite two 3’s and 10 points, begins to complain to the refs, which causes my wife to exclaim, “I want the Suns to win, just because I hate Horry!”

The game’s final minute involves free-throws, missed opportunities around the hoop by Stoudamire, and suspect fouls and general decision-making by Barbosa.

Classic Spurs’ win, well, other than the score in the 100s. The win proves to me that this series can go either way.

The Suns need to get out early and run more. They need to build a lead. They need to keep Parker and Duncan from flirting with the 30-point mark. Yesterday, none of these things happened. Spurs up 1-0. Game 2 tomorrow late night on TNT.