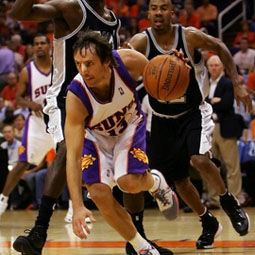 Smart Money.  It’s an expression often used in sports to explain and predict how a game/match/race might pan out.  This past Saturday in Louisville KY, the “smart money” was on Street Sense, who obliged the gambling public by breaking through down the stretch to win the Kentucky Derby.

After Sunday’s impressive win by San Antonio over Phoenix, many around the country were quick to dub the Spurs as the new favorite to represent the West in the Finals.  Tuesday night, however, the smart money was not on the Spurs.  In a classic “bounceback” situation, the Suns were likely to rebound from their Game 1 defeat and produce a home win to even the series at one a piece.  The para-mutual windows at the US Airways Center (imagine with me for a sec) would have been packed with nose-bandaged, ultra-tan, orange-clad Suns fans throwing down their air-conditioning money on the local side.

“Hey, they’re going off as the favorite!”

When that day comes where betting windows can be found on arena and stadium concourses, degenerates globe-wide will rejoice (I think this phenomenon already does exist in London.)  Until then, just sound smart, and know that when the home favorite loses Game 1 of a series (ie the Phoenix Suns) they almost always back that up with a win in Game 2.  Hey, even the Mavericks won Game 2!

The Suns were able to wade through a poor shooting first quarter before taking that all-important double-digit lead early in the second half.  Strong defense, coupled with poor shooting from the Spurs’ backcourt duo of Tony Parker and Manu Ginobili allowed the Suns to cruise to victory, winning 101-81.  Parker, who played so beautifully just two days earlier, struggled mightily from the perimeter, hitting just 5 of 14 shots.

Where the Spurs’ guards struggled, the Suns got a strong performance from not only Steve Nash (who played a great first half) but also got productive minutes from Raja Bell.  The 7th-year guard hit six of nine shots on his way to 18 points and made several key defensive plays during the game’s middle-half.  From there, the Suns relied on their big horse, Amare Stoudemire, as the home team was able to outscore the Spurs by 13 in the final quarter.  For the game, STAT led the Suns with 27, getting 20 of those in the second half.

The Spurs were paced by Tim Duncan who finished with 29 and 11.  With the two titans down low playing to a virtual stalemate, it was Bell, Leandro Barbosa, and surprise starter, Kurt Thomas, who(m) made the difference.  Even Tony Parker’s best man, Boris Diaw, who sat in place of Thomas, came off the bench to give the Suns a 6-point, 7-board, 5-assist, and 2-steal kind of night.  Conversely, the Spurs bench failed to give them the lift they have been relying on since the Denver series.  Paging Bob Horry……

(Side note: Hoping to get into the NHL Conference Finals?  Here’s your chance! Game 3 isn’t until Saturday.)