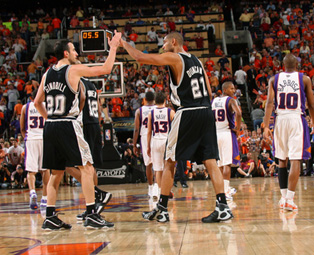 In my nine years of teaching middle and high school, I often pulled a “David Stern.” Although I taught math and science, I often treated the student’s school-rule complaint as a chance for a civics lesson.

Executive Branch v. Legislative Branch.
“I don’t make the rules, I just enforce them.” It’s an easy cop-out for sure, but one that normally kept my teenage constituents at bay, or at least flustered for a few minutes.

Unfortunately for the Commish, the hoop denizens of the world are not such simpletons. With the league’s suspension of Amare Stoudemire and Boris Diaw many saw the postseason’s best series as suddenly tainted. I use that term, despite my own personal claims that Bruce Bowen’s earlier defensive thuggery was not “tainting” the play. Inadvertently, I stand corrected.

Big (Cheap) Shot Bob Horry’s absence aside, last night’s Game 5 seemed a bit off. The game was surely a “must see” as even Stern publicly pondered yesterday (during one of his many appearances) that the game would be one of the most viewed this season. While the league’s boss was more than accurate with his assumption, the long-term ramifications of his decision might hurt the interest in both the conference finals and the finals themselves.

Fairness v. Correctness.
Is it more important to be fair or correct? Stern and Stu Jackson (as if he really has a say in the matter) felt being correct was the most prudent. I truly have no issues with the suspensions considering the rule, however, why then was Tim Duncan playing last night? The gang of two in Gotham (I’m not surprised Stern cancelled his trip to Phoenix.) are apparently doubling as mind-readers. While there obviously cannot be any interpretation with the actual rule, how they deem it appropriate is more than gray. They felt Duncan’s intent was different than the Suns’ duo? They felt that Duncan was only concerned for his teammate? I am confused.

There was a game, though, right?

I was one of those who thought that the decision might actually spur (pun not intended-just caught during revisions) the depleted home team onto victory. 1) The Suns had that whole “Us v. the League” thing in surplus. 2) The game was being played in Phoenix. 3) Bench/support players historically perform better at home.

The home team came out with the expected vigor jumping to a quick lead. The necessity for a line-up change put the Suns’ Shawn Marion back in his normal spot at power-forward. The match-up between the Matrix and the Oberto/Cisco/Nazr grouping was exploited through out the first half as the 7th-year forward from Vegas put his complete game on display. He hit floaters, threes, turnarounds and dunks. Marion’s 20 first-half points paced the Suns to a seemingly insurmountable 16-point lead with just minutes left in the first 24 minutes. The lead would be whittled down to just 11 at half, then 6 at the end of the third, as the Spurs methodically (surprise!) worked their way back into the game behind the solid play of Tim Duncan (again, surprise!). It was a player, however, who has been surprisingly absent for long stretches of the series that had the biggest impact. Manu Ginobili scored 15 of his game-high 26 points in the fourth while also grabbing 10 rebounds. Marion, on the other hand, struggled in the second half, scoring just four the rest of the way. His team, though, still held an 8-point advantage with five minutes left in the game.

The Spurs were able to even the game up at 81 with two Duncan free throws with just less than two minutes remaining. After a couple of fruitless possessions by both teams, the instigator/grappler of the entire series, Bowen, hit his trademark baseline three-pointer to give the Spurs not only their first lead since the game’s first minutes, but also put them ahead for good.

Where do you stand? Fair or Correct? Yes, the rule should/will be changed this off-season to possibly just a monetary hit, but unfortunately this series/entire postseason has now been tainted. Think Stern and Stu are secretly cheering for the Suns?

On that, I am not confused.